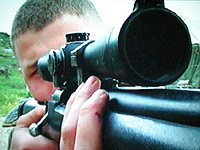 The Finnish media is very particular about the kind of documentaries they allow their captive Finnish viewing audience to see (captive because they pay about $250 a year for their TV permit), especially if its about Israel and the Palestinians. If the films are made by Palestinians (who predictably disparage/berate Israel), or even better yet, Israeli Leftist films about Israel (that are usually as/or worse than the Arabs), you can be assured that they’ll be purchased by either YLE1,2, MTV3 or Nelonen.

Last night we were served a rehash of the same documentary seen about a year ago, titled “One Shot”. It’s an Israeli film directed by Nurit Kedar, who peers into the world of Israel’s sharp shooters. While the dialogue was indeed interesting, (those interviewed emphasize that there are very strict rules of engagement, what portion of the body (legs) can be targeted ect.) those interviewed though, were very unaware that the purpose of the film was to portray them as being evil. So during the film, the producers, editors, writers kept showing pictures of Palestinian kids through fake rifle scopes and with telephoto lenses along with frightening music, as if all men, women, and children were targets of the IDF monsters.

Perhaps MTV3 would consider airing Obsession, as to give the other side (Israel) for a change a chance to tell its own story? It would help to rid the Finnish public’s preception that the Finnish media is partisan. I am not holding my breath though. *L* KGS

Here’s one of the reason why Israel has to maintain its group of sharp shooters.