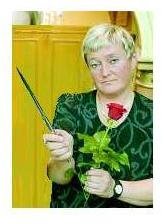 Finnish state owned television network YLE, continues to allow its Middle East news correspondent, Leena Reikko, to shill for the Palestinians. YLE’s nightly news broadcast offered its Finnish viewers a biased version of the events, with only a brief mention that 9 Israelis were killed, choosing rather to devote most of their film footage to show the young ‘innocent face’ of the homicide bomber in his farewell video. All of which served towards eliciting a positive affect towards him (extensive personification/ individualization).

Reikko’s main worry of course, was only the “cycle of violence” which is now inevitably about to follow, as Israel “is bound to take revenge”. She also took great pains to explain that “Hamas itself” had refrained from suicide attacks but refused to condemn those made by others, which is absolutely false, since Hamas works closely with all the terrorist groups, and has carried out attacks itself during the last year. How blunt can the Finnish state sponsored media (paid by Finnish tax-payers) get in taking sides? And Finland is going to be chairing the EU rotating presidency this August. KGS

Israel announced that, though they place full blame for the terrorist bombing in Tel Aviv upon Hamas, they will not take any military action against the PA. Israel will choose instead to increase their security against further Palestinian terrorist attacks. No doubt Finland’s YLE will most certainly ‘forget’ about Israel’s decision not to take action against the PA this time around. When the next successful terrorist attack occurs, and Israel does launch a military strike, YLE and the rest of the MSM will dust off their well worn “tit for tat”, “cycle of violence” expression, and once again present to the public an intentionally warped version of events.

No doubt the Israelis will get a “drubbing” for its increased security measure, because the Arabs will be even more inconvenienced by an increase of roadblocks for security checks. KGS