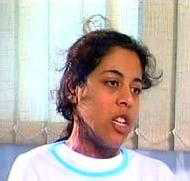 Thanks to the website Palestinian Media Watch , we have ample proof of just how far Palestinian society has sunk itself. When a society offers no future for its young, other than the way of Jihad and death, stories like Wafa Al-Bas, a 21-year-old Palestinian woman become all to familiar and sadly all to common.

Palestinian youth should be celebrating life, preparing for their futures, looking forward to being a positive part of society instead of getting manipulated to commit murder and mayhem through collective peer pressure from their elders.

One thing is for sure, that the sons and daughters of those in power will not bear the ‘so called’ sacred duty of ‘shaheed(killing themselves), that duty is reserved for the ‘minions’ who serve those in power, with a blind ‘sheep like’ mentality. Its never the leaders’ sons or daughters, because the issue here is as old as time itself, power and money. Sure, the ones that go off to commit heinous acts of ‘cold blooded’ murder are religious fanatics, but the ones who send them are more interested in power.

The woman in question had been treated in an Israeli hospital for burns she received in a gas stove explosion in her home. It was the Soroka Hospital in Bersheeva that was the intended target, the very same place where she had been receiving medical attention. She had hope to murder at least 50 Israelis and wished that there were children among the casualties. I speak as an optimist when I say that, ‘surely she isn’t representative of the majority of Muslims in the world’. Surely no religion would be willing to allow for such callousness and evil to be done in the name of their God.

The Culture of Death that has taken root in Palestinian society now allows for such depravity, even considered to be normal. Here is her mothers interview. Truly shocking. KGS

One more note; An IDF soldier once noted that while he was in the Jenin refugee camp, he noticed that there were no places for children to play. Nothing dedicated to the enjoyment of their youth, just endless rows of pictures of suicide/homicide bombers, like something right out of Ripley’s Believe It or Not. How can a society prepare its future generations for peace and co-existence with Israelis, if they spend their time and energy indoctrinating them to murder Jews?