With the upcoming elections within the Palestinian Authority, a troubling question comes to mind. How does one define the term ‘moderate’ and ‘extremist’ when talking about the various Palestinian groups, ranging from Hamas to Fatah’s Tanzim/Islamic Jihad? According to European politicians and the media, moderation is based soley upon the number of attacks a terrorist group carries out, with Hamas clearly leading with over 400 terrorist attacks in 2004.

Since the installation of the security fence, homicide/suicide terrorism is way down, reflecting the marked increase of rocket attacks by all terrorist parties concerned. But when it comes to determining the ‘moderation’ of a Palestinian group, the numbering of succesfully launched rockets and number of Israelis killed is a morally wrong method to use. Failed attempts to murder civilians does not prove moderation. KGS 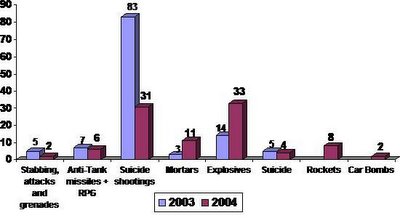 In 2004, the Tanzim perpetrated 97 terrorist attacks, as opposed to 117 in 2003. The data shows that the Tanzim began the year with rocket attacks as part of the terrorist organizations general effort to launch rockets at Israeli targets even though no rocket attacks were attributed to it in 2003. Similarly, it is possible to discern a massive decline in the number of Tanzim-perpetrated shooting attacks. 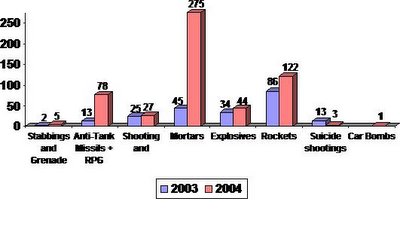