Here is an interesting set of statistics for those who believe that Fatah and its affiliated terror groups are more ‘moderate’ than its rival, Hamas. According to the website of the Israeli Ministry of Foreign Affairs, the amount of homicide/suicide attacks carried out by the various Palestinian terror groups in 2005, (that the IDF failed to intercept) was 7, while murdering 23 Israeli citizens, with an average of 3.2 victims per homicide bombing. In 2004 it was slightly more, averaging 3.6 Israelis murdered per attack. The drop in attacks can be properly accredited to the combined measures of Israel’s passive security barrier and its use of roadblocks. The anti-terror fence works. 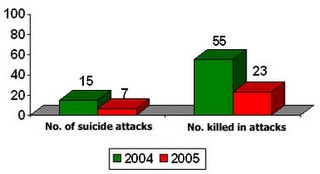 When looking at the number of attempted homicide/suicides by Palestinian terror groups in 2005, (IDF successfully intercepted) it clearly shows that Fatah’s armed wing, the Tanzim, were intercepted 47 times, that would have mudered 169 Israeli citizens(using 2004 statistical average). Hamas during the same year was stopped 29 times thereby saving 104 lives. 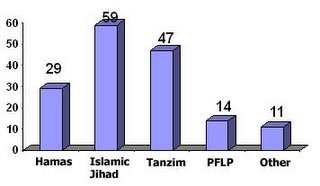 Clearly these numbers by themselves spell out just how potentially lethal Fatah’s armed wing the Tanzim is, in comparison to Hamas, who is supposedly the more ‘moderate’ of the two.

Upon Arafat’s orders, another Fatah terrorist group, the Al-Aqsa Martyrs Brigades, was founded and commanded by Marwan Barghuthi (now serving multiple life sentences in an Israeli prison for murder) and has proven itself to be as deadly. Arafat had always claimed innocence to AAMB’s founding, but a recent interview on Al-Jazeera TV of Palestinian Authority National Security Advisor Jibril Rajoub revealed otherwise. Anyway you look at it, moderation is in very short supply on the other side of the Israeli security fence, regardless of the group. KGS