A total non-story in a saner age…

GW/CC hysteria and policies are premised on fraudulent science. CO2 is a needed gas, without it we would be Mars! The magicians of climate policies are nothing more than power grabbers, their huge governmental intervention schemes in the economy will cripple it for decades. This story by the Finnish state propaganda network, Yle, is meant to cause concern, dismay for the so-called “pollution” created by the average traveler and make them enemies of the state.

Cries of TAX THEM will soon be heard on the streets by the pitchfork-wielding delusional, all the while the elitist clique driving the hysteria flies by private jets any chance that they can get.

CO2 is your friend, create lots of it!

According to fresh figures, flying Finns are responsible for more CO2 per person than any other nation except Singapore.

People resident in Finland cause more carbon dioxide emissions by flying than those resident in any other country in the world except Singapore, according to new figures from the International Council on Clean Transportation.

CO2 emissions caused by international flights to and from Finland are around the same as emissions from private cars in the country.

Third in the ranking is Iceland, fourth is Australia and in fifth spot comes Britain. 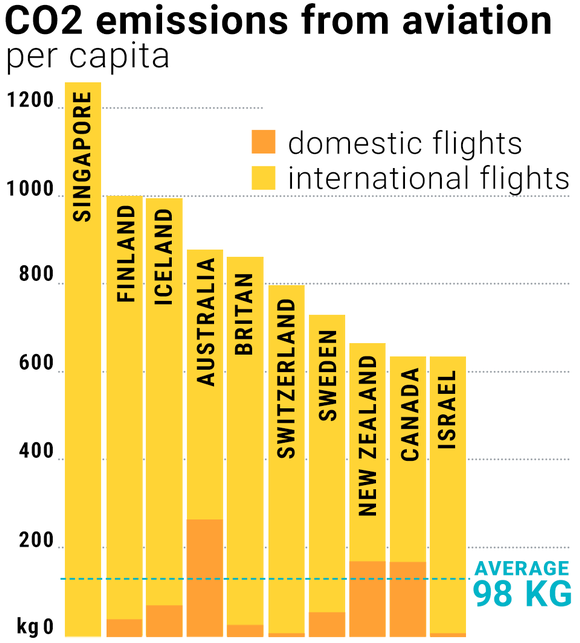 The figures include passengers whose journeys start or end in Finland, but not transit passengers heading through Finland on their way to other countries.

Singaporeans were responsible for some 1.2 tonnes of CO2 from flights, while Finns and Icelanders were the cause of around a tonne each.

A tonne of carbon dioxide is emitted by, for example, driving the average new car sold in 2019 for around 6,000 kilometres.

The data also stripped out foreign tourists by adjusting the dataset using data from the World Bank. If those visitors were included, the countries with the highest emissions would be the Domincan Republic, Croatia and Portugal.

The biggest emissions in absolute terms, that is not divided by population, come from American, Chinese, British, Japanese and German flights.