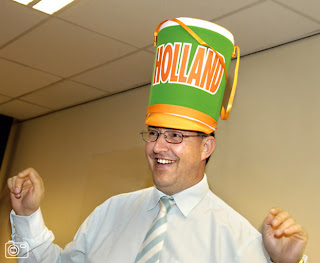 The 15th Palestinians in Europe Conference sponsored by an affiliate of the Hamas terrorist organization will take place in Rotterdam on April 15.  A motion by the Leefbaar Rotterdam Party to forbid the conference was defeated.  Organizations representing the Dutch Jewish community have expressed their fear about the content of the conference, as well as its impact.

Dutch veteran journalist Carel Brendel has investigated the background of the PRC in detail. He quotes the 2011 intelligence service report of the German Ministry of the Interior which writes that “Hamas does not operate openly in Europe. Instead it uses, for instance, the Palestinian Return Center in London as a forum.” Brendel also quotes intelligence reports of the federal states of Berlin and North Rhine-Westphalia with similar conclusions. Brendel says that two of the key figures of the conference identify with Hamas and are seen as loyal supporters by the organization.

Brendel points out that the PRC in the UK is also related to the Muslim Association of Britain, the Muslim Brotherhood’s main declared British affiliate, with whom it shares directors. This is confirmed in the Daily Telegraph, which investigated connections between the UK Muslim Brotherhood and Hamas. The newspaper also mentions that the PRC has regularly hosted Hamas leaders at its previous annual conferences.

While all this and more is known to the Dutch National Coordinator for Security and Counterterrorism (NCTV), it has inexplicably expressed no objections to the planned congress. Apparently free speech, even for terrorist supporters, is part of Dutch values.

Whether the congress takes place or not will be a litmus test for Rotterdam mayor Ahmed Aboutaleb, a moderate Orthodox Muslim. While a member of the extreme anti-Israel Labor Party, he has not publicly expressed anti-Israel sentiments in the past. After the Paris terrorist murders in January 2015 he said, “For those who have sympathy for the attack, there is no place in the Netherlands. For Heaven’s sake, pack your bags and leave.” In 2008 he opposed the twinning of Rotterdam and Gaza, which the leftist parties in the Municipal Council, including his own Labor party, had proposed. Ultimately, this proposal was narrowly defeated.

In 2014, during Israel’s Protective Edge campaign in Gaza, there were many anti-Israel demonstrations in the Netherlands. Yet, Aboutaleb received representatives of the local Jewish community- with the Rotterdam police chief also present – as a sign of support. Aboutaleb also gave a very moving speech on National Remembrance Day for the Second World War in 2016. There he devoted substantial attention to the persecution of the Jews by the German Nazi occupiers.

But now, the leading Jewish organizations in the Netherlands have written to the Mayor, expressing their fear about the content of the conference. For many years, Jewish schools and synagogues have had to take severe security measures. A recent documentary drew attention to the spread of anti-Semitism in the Netherlands. Against this backdrop, the Jewish Community is understandably fearful about the impact of the conference.

In the Rotterdam Municipal Council, the Leefbaar Rotterdam party has said that most of the conference’s organizers are linked to Hamas. The party accuses Aboutaleb of putting out a red carpet for a terrorist organization. Municipal Council member, Tanya Hoogwerf, says that Rotterdam has increasingly become a place for jihadism. However, when Leefbaar Rotterdam proposed the prohibition of the conference on February 23, no other party supported it.

Mr. Aboutaleb has exhibited great leadership and personal courage in the past. He needed personal security guards when he was deputy mayor of Amsterdam more than ten years ago, due to threats from extremist Muslims. For someone so familiar with the huge problems coming out of parts of the Dutch Muslim population, and from extremist segments of the Muslim world at large, Aboutaleb’s contention that the conference poses no risk to public order is shocking and disturbing. Local Jewish organizations rightly point out the potential dangers of such a conference.

Rotterdam is also a problematic town for Jews for other reasons. These include its Feyenoord soccer club, which currently leads the Dutch League. For many years during games, the chants of “Hamas, Hamas, Jews to the Gas” resonated in the stadium. The Jews referred to are supporters of the Amsterdam Ajax football club, who gave themselves the nickname “Jews.” So for new generations of Dutch, such hate has entered society’s mainstream from the stadiums of Feyenoord and several other Dutch football clubs. For instance, at an anti-Israel demonstration in 2009, in which also two parliamentarians of the left-wing Socialist Party participated, these slogans were shouted by demonstrators in the streets of Amsterdam.

How many more Europeans will have to be added to the list of victims who so far have been killed or wounded by Muslim terrorism, before countries will take problems coming out of extreme segments of Muslim communities more seriously? We can only hope that the mayor of Rotterdam and politicians from all mainstream parties will show the necessary leadership and denounce the Hamas supporters convening this conference.

Co-author of this essay, Dr. Manfred Gerstenfeld is the former Chairman of the Jerusalem Center For Public Affairs.