The Orwellian named group “Students for Justice in Palestine” (SJP) make a mockery of peace loving people, they’re for hate of Israel. This is a great poster that actually depict who they really are, and what they’re demonization of Jews/Israel eventually leads to when implemented by a political entity like the PA. or Hamas (and other Arab/Muslim governments for that matter).

‘Stabbing Jews for Peace’ Posters Mock Pro-Palestinian Group at U. of C. 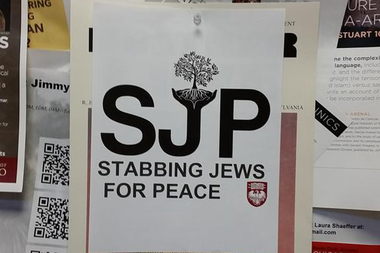 HYDE PARK — A debate about Israel and Palestine boiled over at the University of Chicago this week with the appearance of posters seemingly accusing a pro-Palestinian group of  “Stabbing Jews for Peace.”

The posters were found by students posted in three university buildings on Monday, but appear to have since been taken down.

“That’s really disturbing,” said a recent grad of the university working on campus that declined to be named. “If that’s a poster on this campus, that’s terrifying.”

The campus group Students for Justice in Palestine said Monday it believes the poster was aimed at it.

Zach Taylor, student leader for the group, said the group believes it was a response to a poster campaign that his group started last week that was critical of the treatment of Palestinians by Israeli security forces. One flier accused security forces of murdering a 13-year-old.