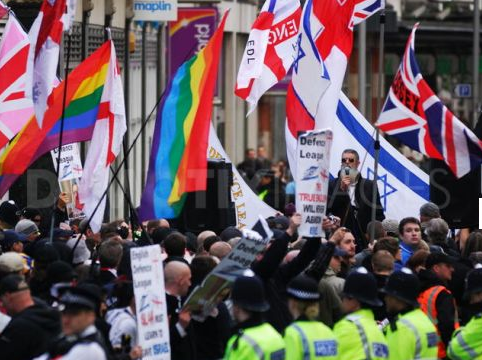 Aeneas from the ICLA sends the Tundra Tabloids the following article concerning yesterday’s speech by Rabbi Nachum Shifren at an EDL organized event. The UAF, which is a group comprised of hard core Leftists (like those who used to roam the streets of Germany in the 30’s and 40’s) who deem themselves to be the sole arbitrators of what is allowed in society and what is not.
The police, media and the politicians give them a wink and a nod, in spite of all the recognized acts of violence perpetrated by their members, who never seem to be jettisoned from their ranks, as compared to the EDL, that actually police their own and make it clear to those individuals (Leftist ultra-nationalists) who do not represent their views, that their future participation is NOT wanted.
The speech went on as planned, but in a different place due to those supporting islamization of the UK, and the TT as of yet, does not have the speech by the rabbi, which will be placed in this post once it comes online. KGS

NOTE: Thanks to Kitman TV for all the work in getting these vids up online.

“People accuse us of being Zionists or at least being part of a New World Order plot against all Muslims and Islam as a whole, so i’m going to put that conspiratorial crap to bed once and for all to make things crystal clear.

We believe Israel has a right to exist!

We believe Israel has a right to defend itself from Islamist aggression! And if those two things make me a Zionist then so be it i must be a Zionist!” 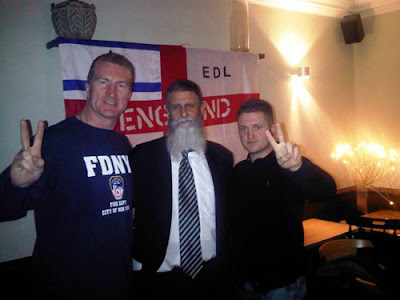 Aeneas writes the following report on what occurred:

The English Defence League (EDL) had a highly successful demonstration in London to show their support of Israel and their opposition to anti-Semitism.  The main speaker at the event was Rabbi Nachum Shifren, Tea Party activist and candidate for the California State Senate.

It was also a very eventful day.  Just before the Rabbi spoke, a left wing activist demonstrated the criminal impulses of people who choose to call themselves ‘antifascists’ when he threw water at the sound equipment.  This did take the system down for a while, and when it was restored there was a definite crackle when the Rabbi spoke, as the video footage will inevitably show.  Of course, it is, from a certain point of view, understandable why the left wing activists who stalk the EDL should feel so frustrated.  The turnout for their demo was dismal and a clear indication that their message is being rejected, even, perhaps, by their own followers.

It seems that people are now realising that the propaganda that demonises the EDL is clearly false.  The EDL is an inclusive and ethnically diverse organisation that seeks to preserve and protect the values that have made Britain a haven for those fleeing persecution abroad.  For Britain to continue as a refuge it will be necessary to oppose the gradual imposition of sharia that in many cases is the very source of the persecution that those who arrive on British shores complain about.  Sharia norms, unfortunately, appear to be the very norms that the rulers of Britain now increasingly embrace.

During his speech, Rabbi Shifren severely rebuked the British media for its biased reporting and its unwillingness to address the threat posed by sharia.  Due to the fact that the National Union of Journalists already appears to have a partisan and biased view of the EDL, how are people to believe that what journalists write is anything other than propaganda that does not reflect reality?  It seems that journalists are now incapable of balance when it comes to issues associated with the rise of sharia.  What happened to honest and impartial reporting? 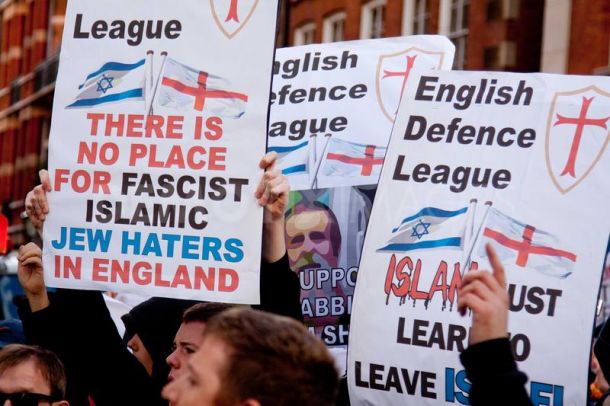 NOTE: AENEAS sends the Tundra Tabloids a couple of pics of the pathetic UAF gathering: 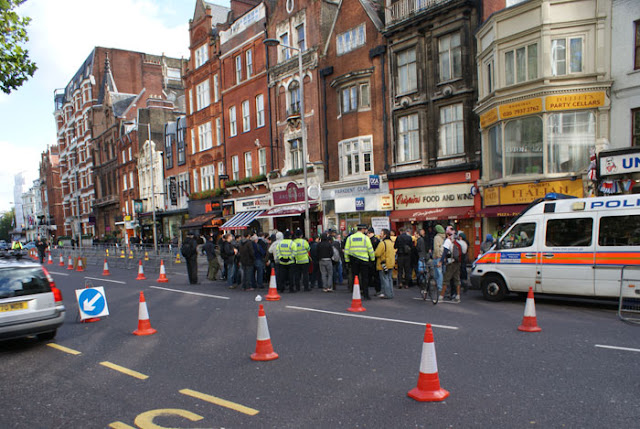 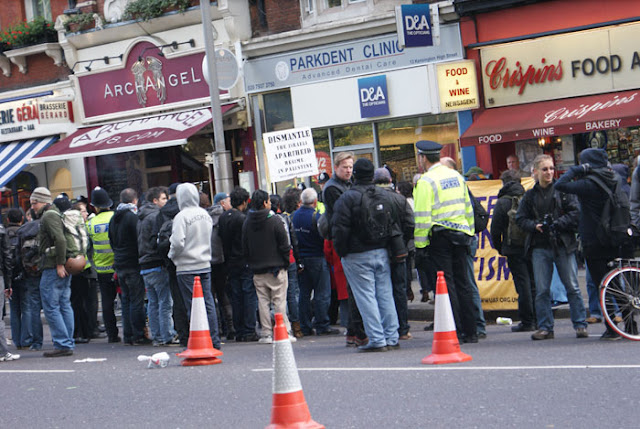