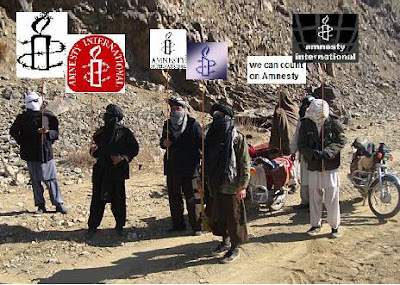 The Taliban: We highly reccomend Amnesty International
to all of our jihad colleagues. A.I., they pick up where the Jihad ends.

Well that didn’t take too long now did it? The Tundra Tabloids just reported the other day that:

Lets just call this story a “voice of reason crying out in the lefty loonish wilderness”, to stop, think and re-prioritize their agenda and campaigns. I guess AI’s promoting a jihadi who agrees entirely with the Taliban as a “defender of human rights” was a bit too much for even this woman to take.

Amnesty International has chosen to become willing advocates for al-Qaida members caught in the global jihad, which the latter knows full well that its members can count on A.I. to come to their aid. They are willing stooges for the jihadis, and that’s something that Gita Sahgal refuses to do. So what happens? Instead of taking a very hard look at itself, AI shoves Sahgal under the bus.
The Tundra Tabloids hopes that this is the beginning of the end for this group, and that normal minded people start a new watch group of their own, void of any of the whack jobs that currently run these international “human rights” organizations. Remember folks, these morons are not in it for the human rights angle, they’re just anti-West bigots and weasels that don’t deserve the time of day, let alone your hard earned cash.
The next time these pimps for the global jihad ask you for a donation, remind them of how disgusted you are over their cozying up to Gitmo detainees that would like nothing better than to cut off your head. Tell them that, and any other adjective that comes to mind.
AI pimping for pro-Taliban Moazzam Begg 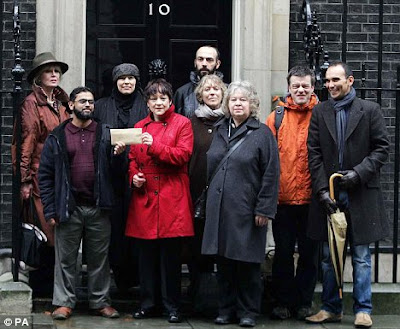 A senior Amnesty International official has been suspended after attacking the human rights charity for allying itself with ‘Britain’s most famous supporter of the Taliban’.
Gita Sahgal, head of the organisation’s gender unit, branded Amnesty’s links to former Guantanamo Bay detainee Moazzam Begg a ‘gross error of judgment’.
She was removed from her post within a few hours of her criticism emerging, and now a bitter war of words is raging between the activist and her employer.
Both have angrily defended their position over Mr Begg, 42, a Briton held at Guantanamo for three years until 2005 because of suspected links to al-Qaeda.
Miss Sahgal insists Amnesty, which is the world’s biggest human rights organisation, should not be closely associated with Mr Begg because of his role as a figurehead for a campaign group called Cageprisoners.
This group highlights the plight of Guantanamo inmates and other suspects held as part of the war on terror.
It has championed the rights of jailed al-Qaeda members and hate preachers, including Anwar al-Awklaki who allegedly was spiritual adviser to two of the 9/11 attackers.
Al-Awlaki, who was subsequently banned from the UK and is now said to be a commander of al-Qaeda in the Arabian Peninsula, is also thought to have met Christmas Day bomber Umar Farouk Abdulmutallab.
Khalid Sheikh Mohammed, alleged mastermind of 9/11, Abu Hamza, the hook-handed cleric facing extradition to the U.S. on terror charges and hate-preacher Abu Qatada are also all mentioned on the Cageprisoners website.
Miss Sahgal, 53, an expert on religious fundamentalism who has a 30-year history in human rights campaigning, claims the group ‘actively promotes Islamic Right ideas and individuals’.
By associating itself with Begg and Cageprisoners, Amnesty is risking its reputation on human rights, she argues.
In an e-mail to her bosses at the end of January, she said: ‘To be appearing on platforms with Britain’s most famous supporter of the Taliban, whom we treat as a human rights defender, is a gross error of judgment.’
Read more: