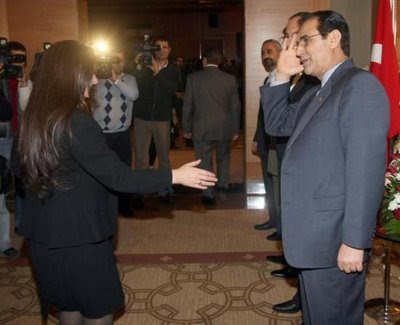 Iran’s ambassador to Turkey:
I can disrespect you, Islam says I can
Get this, a Muslim welder in Sweden shakes the hand of everyone else in the room except the woman who’s doing the hiring, and then claims “discrimination” after he doesn’t land the job. That’s it in a nutshell, jihad litigation, which means getting the non-Muslim to bend to Muslim norms and eventually to accept those norms for themselves. KGS

Employment centre sentenced for discrimination of Muslim man
The Public Employment Centre has been sentenced to pay 60 000 SEK to a Muslim man. The reason is that they have denied him his regular unemployment benefits after he refused to shake hand with a woman at his presumptive trainee-job. In 2006, the 24 year old Alen Malik Crnalic applied for a trainee-place as welder at a company in Älmhult, south Sweden. But during the work interview, he refused to shake hands with the female CEO. As an active Muslim, Malik Crnalik is not allowed to touch women outside his family. Instead he greeted through placing his right hand on his chest and bowed.
After the interview his application was turned down. The company claimed that the reason was lack of competence but the public employment centre meant that his behaviour during the interview was the reason and therefore cancelled his unemployment benefits.
– I was called to a meeting and over there they said that I turned down the job-offer through this gesture. I was very disappointed and angry. I had worked hard to get a job, Alen Malik Crnalic said to Svenska Dagbladet.
Mr. Crnalic appealed the decision to the National Labour Market Board (AMS) which rejected his appeal. This was however followed by a new process where the Ombudsman for Discrimination (DO) sued the public employment centre for discrimination.
The final sentence by the District Court, which came recently, DO was correct. The court claims that it is clear that the man could not shake hands with the woman for religious reasons and therefore his unemployment benefits should not have been cancelled.
According to the CEO of the company, the decision to not give the man a trainee-job was not based on his way of greeting.
– He simply did not have the qualities that we demanded, she says to Swedish Television SVT.
But the CEO felt however insulted by the way she was treated by th man.
– I felt humiliated. He shook hands with everybody except for me, she says to SVT.
The sentence may have a guiding impact on future practice around such issues.