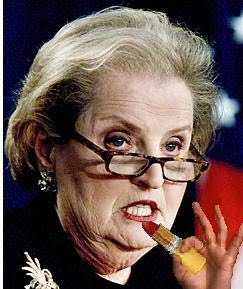 Proof that the US Left
is really left of left
She was the former US Secretary of State for crying out loud!
Madleine Albright, former Sec-State during the Clinton administration delivered a speech in Siberia, Russia, of all places, that has served to remove any last semblance of Democrat willingness to put American self interests first. Forgetting the American exceptionalism that has made the US, until recent times, the envy of the enitre world, Albright, a refugee who fled with her parents from Czechoslovakia during the late 30’s, finds that exceptionalism ro be …troublesome.

I doubt that her parents would agree with her, especially after reaching its shores and seeing their daughter reach one of the highest political offices in the land. No, Albright rejects Americanism, and wants to place that great country on the same level playing field with all the other countries in the world, even with those who have rejected representative style democracy. Albright’s America has no need for getting other people angry at them, Yeah, like dictators and tyrants and a host of other bad apples around the globe. KGS

Note: Albright also made headlines for running after the heels of stinky Arafat, during the Paris “peace talks”, where Yasser Arafat rejected the sweetest deal of a lifetime, and walked out,…with a pleading Madeline in tow.
What They Really Think

Former Secretary of State Madeline Albright spoke at a forum in Omsk, Siberia. Pravda reported that her speech “surprised the audience.” No wonder. The Russians in attendance must have wondered how they managed to lose the cold war:

Madeleine Albright said during the meeting that America no longer had the intention of being the first nation of the world. Ms. Albright started her speech in Russian. “Hello and thank you! It’s a pleasure for me to be here,” she said in Russian. Albright wrote in her autobiography that she was trying to learn some Russian during the 1960s.

The former US Secretary of State surprised the audience with her speech. She particularly said that democracy was not the perfect system. “It can be contradictory, corrupt and may have security problems,” Albright said.

America has been having hard times recently, Albright said.

“We have been talking about our exceptionalism during the recent eight years. Now, an average American wants to stay at home – they do not need any overseas adventures. We do not need new enemies,” Albright said adding that Beijing, London and Delhi became a serious competition for Washington and New York.

“My generation has made many mistakes. We give the future into the hands of the young. Your prime goal is to overcome the gap between the poor and the rich,’ the former head of the US foreign political department said.

There you have it. And Albright was Secretary of State during the relatively moderate Clinton administration. I’m afraid she speaks for most Democratic foreign policy “experts.” Promoting American weakness: it’s not a bug, it’s a feature.

By the way, since “overcoming the gap between the poor and the rich” is the world’s number one priority, do you suppose Albright waived her speaker’s fee, which is listed coyly as more than $40,000? No, I don’t think so, either.