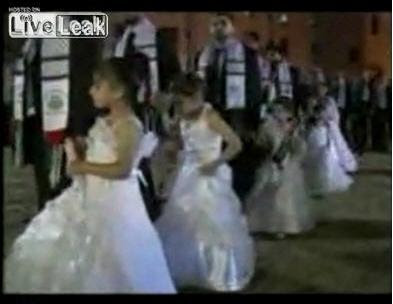 Little do they know what awaits them

UPDATE: See here for more info. The TT origianlly pulled this post, now its back up with more info on the brouhaha. It appears that Tim Marshall…..NEVER SAW THE REAL BRIDES HE CLAIMS WERE THERE AT THE WEDDING.

The Tundra Tabloids doesn’t want hear anyone claiming that these ‘grooms’ will be waiting 6-8 years for their wives to start their menstrual periods and mature into adults, before they pluck their prize. I find that an unlikely scenario.

Also worth noting is the Al-AFP’s report which fails to mention the presence of the “little tots for terrorists” at all, funny how that little tid-bit failed to find space in the article somewhere. It only goes to show you that the ‘local’ media that these news wires lean heavily upon, fail to report ALL OF THE NEWS, this is just one stark example.

VIA: Atlas Shrugs (read Pamela’s post on it as well)

SHEIKH ZAYED CITY, Gaza Strip — Nearly a thousand Palestinians celebrated marriage on Thursday night in a ceremony organised by Hamas in the north of the Gaza Strip.

Hamas dignitaries including Mahmud Zahar, one of the militant group’s top leaders, were on hand to congratulate 450 grooms who took part in the carefully stage-managed event.

“We are saying to the world and to America that you cannot deny us joy and happiness,” Zahar told the men, all of whom were dressed in identical black suits and hailed from the nearby Jabalia refugee camp.

Each groom received a present of 500 dollars from Hamas, which said its workers had also contributed five percent of their monthly salaries to add to the wedding gift.

The 450 brides shared none of the glamour, taking seats among the audience of around 1,000 party guests: most couples had already taken part in religious ceremonies elsewhere, with more marriages planned for the next few days.

“We are presenting this wedding as a gift to our people who stood firm in the face of the siege and the war,” local Hamas strongman Ibrahim Salaf said in a speech.

The Gaza Strip has been under Israeli blockade since the Islamist Hamas movement seized control there in June 2007. In December and January 1,400 Gazans and 13 Israelis were killed in a 22-day war that left much of the territory in ruins.