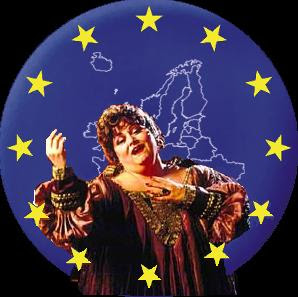 As long as the fat lady keeps singing, it ain’t overSunni clerics meet in Istanbul and urge new jihad over Gaza

At a weekend meeting in Istanbul, 200 religious scholars and clerics met senior Hamas officials to plot a new jihad centred on Gaza.

The BBC’s Bill Law was the only Western journalist at the meeting.

In a hall crowded with conservative Sunni Muslim sheikhs and scholars, in a hotel close to Istanbul’s Ataturk Airport speaker after speaker called for jihad against Israel in support of Hamas.

The choice of Turkey was significant. Arab hardliners were keen to put aside historic differences with the Turks.

As one organiser put it: “During the past 100 years relations have been strained but Palestine has brought us together.”

Many delegates spoke appreciatively of the protest by Turkish Prime Minister Recep Tayyip Erdogan, who stormed out of a Davos debate on Gaza two weeks ago.

Jihad?Are we to believe that these 200 Muslim clerics are discussing how best to attack Israel with their “inner struggles”? How is it that all these Muslim clerics who call for jihad, for one reason or another, are just badly misinterpreting their own Islamic texts? At least that’s what the weak kneed Western governments and their apologists would have you to believe. To call things as they actually are, earns you a spot on the opposite scale of al-Qaida and Islamic fundamentalists, because they are saying the same things about Islam.Turkey lends a handTurkish Prime Minister, Recep Tayyip Erdogan, accused Israel during the Davos forum in Geneva of “committing massacres” and “mass murder” of the Palestinian people, when in fact it was Hamas’ war crimes of shelling Israeli civilians and using its own people as human shields to do it, that were responsible for any Palestinian deaths. ALL OF THEM. Israeli president Shimon Peres, knowing full well that Erdogan was just repeating some of the foulest propaganda circulating the internet, responded elequently by reminding the audience of exactly what kind of animal minds were/still are currently running Gaza: Hamas is Throwing People off Roofs“. Thanks to Erdogan’s statements, the Islamofacists are now emblodened to plan a world jihad against Israel.

Continued: The conference, dubbed the Global Anti-Aggression Campaign, also gave impetus to Sunni clerics concerned about the growing power of Hezbollah, the Shia movement backed by Iran, which rose to international prominence in its own war with Israel in 2006. “Gaza is a gift,” the Saudi religious scholar Mohsen al-Awajy told me. He and other delegates repeatedly referred to the Gaza war as “a victory”.
“Gaza,” he continued, “gives us power, it solves our differences. We are all now in a unified front against Zionism.” In closed meetings after sessions delegates focussed on the creation of a “third Jihadist front” – the first two being Afghanistan and Iraq. The intensity of the Israeli attack had “awakened all Muslims,” Mr Awajy claimed. “Palestine is a legitimate theatre of operations for jihad (holy war),” he added.
Road to liberation Mohammed Nazzal, a senior Hamas leader based in Damascus, challenged Arab governments to “open their borders and allow the fighters to come.” Delegates from all over the Middle East, and from Somalia, Sudan, Pakistan and Indonesia applauded as he stabbed the air with a raised finger and declared: “There will be no agreement with Israel… only weapons will bring respect.”

Gaza has opened a gulf between Arab people and their regims, the clerics say
Mr Nazzal told his audience: “Don’t worry about casualties.”

That’s right, like Hamas, the Islamo-whack jobs do not worry about casualties in the least, the ends justifies the means, which makes them the exact carbon copy of al-Qaida. KGS 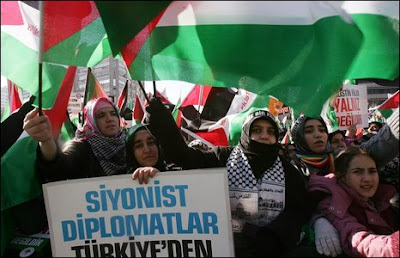