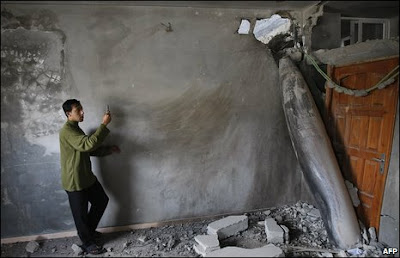 The Tundra Tabloids is really touched by the UN’s great show of concern……Not.Back in 2006, the UN said UNSC resolution 1701 would ensure that Hezbollah would not be rearmed by Iran, which was its “primary concern”. Hezbollah fanatics are now better armed with weapons and longer range missiles than before the outbreak of the Lebanese-Israeli war. Here’s an article by Caroline Glick on the subject.An urgent memo to the next government

The outgoing Kadima-Labor government’s anticipated decision to release a thousand terrorists, including several dozen mass murdering terror commanders, in the framework of a ceasefire deal with Iran’s Palestinian proxy Hamas is simply the latest troubling legacy that the Olmert-Livni-Barak government is leaving its successor. Once the deal goes through, Hamas will be able to quickly expand the threat it poses to Israel. The jihadist group is already using the political legitimacy Israel is conferring on it to reestablish its unity government with Fatah. When that government is formed, the US and Europe will move hastily to recognize the terror group. Hamas will use its increased legitimacy as a screen behind which it will expand its offensive capabilitiesThis is particularly true in the field of ballistic weapons. We know this will happen because we have already seen what happened with the last Iranian proxy that Israel signed a ceasefire agreement with. Since Israel agreed to UN Security Council Resolution 1701 and brought its war with Hizbullah to an end in August 2006, Hizbullah has reasserted its political and military control over south Lebanon and has taken over the Lebanese government. Moreover, it has massively expanded its missile capabilities not only by tripling the size of its arsenal, but by tripling the range of its missiles. In 2006, Hizbullah’s most powerful missile was a Fajr rocket with a 100 km range and a 50 kilogram warhead. Today, according to Avi Schnurr, executive director of the Israel Missile Defense Association, Hizbullah has an arsenal of Fatah-110 ballistic missiles with a range of 300 kilometers and a 600 kilogram payload. While our media elites endlessly drone on about whether or not Likud is sufficiently “pro-peace” to satisfy Meretz and Kadima, our national discourse is ignoring the greatest threat this country faces: missiles. Schnurr warns that today there are more missiles pointing at Israel in absolute numbers than at any other country on earth. While Israelis are properly concerned with suicide terrorism and Kassam rocket attacks, the fastest escalating threat that Israel faces come from ballistic missiles. In addition to Iran’s Hamas and Hizbullah proxies, its client state Syria has a massive missile arsenal housed in hardened silos. Syria’s missiles are capable of attacking every square centimeter of Israeli territory. And of course, with its rapidly growing land and sea-based ballistic missile arsenal, Iran itself is the fastest growing missile threat facing Israel.