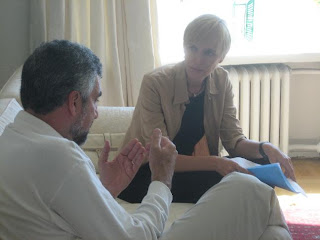 The Tundra Tabloids is back! Having just returned to the humble homestead after a full week of sun and surf, the TT, after having received permission, posts the following interview of Dr.Daniel Pipes by Iivi Anna Masso.
The TT apologizes for the sporadic posting, but some things do come first! The interview was first published in Finnish at the Uusisuomi, on the 27th of June this year. *L* KGS
Interview with
Daniel Pipes

Daniel Pipes is a distinguished US scholar of the Middle East and the director of the think tank Middle East Forum (www.meforum.org). He has written and edited a dozen books about the Middle East and Islam, and is an active discussant on subjects such as Islamism as a political ideology, the American “War on terror” and the Israeli-Palestinian conflict. This interview is done in Helsinki, where Mr. Pipes visited briefly during Midsummer.

Q: European media often treats Israel as the rogue state of the region. It has been even suggested that the creation of the state was a mistake. Do you see Israel as a “rogue state”?