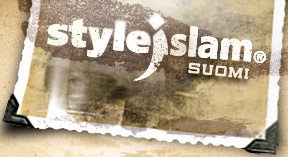 The Islam they want you to see. From a propaganda point of view, it’s a novel idea, just take a look at the introduction.
StyleIslam® wants to show the true side of our faith, because we love peace. We stand for the mutual coexistence of all religions, with respect and tolerance. With this special edition, StyleIslam® is reacting creatively to media-based hostilities and provocations, and shows who we really are. This series is aimed at strengthening the identification of young, dynamic Muslims with their prophet, Muhammad (s.), and practicing positive communication.
Looking through history however, the “true side” of Islam is one of imperialism and violence towards non-Muslims when Islam has the upper hand, as well as hostility towards the unbeliever whenever they form the majority in formerly non-Muslim society. StyleIslam would like for us to believe that Islam wishes to co-exist with, as well as respect, all other religions, but as history proves, the exact opposite is true. 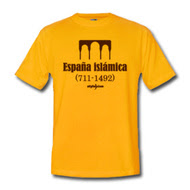 The StyleIslam T-shirt pictured on the right is very out in the open with their claim on Spain. The period of the Islamic occupation of Christian Spain is written brazenly across the front of the shirt, (711-1492). Of course the Islamic apologists will point to “Andulas” as the Golden Period in the relations between the three so called “Abrahamic religions”, but even that is a bunch of tripe.

According to the site, StyleIslam is reacting to “media based hostilities and provocations”, …really? what SI is upset about is the daily reporting of Islamic inspired mass murders, as well as the western media’s pointing out that the mass murders have been Islamic inspired. When it comes to strengthening “young dynamic Muslims with their prophet Mohamed”, if they have a religious father, at the age of seven, boys are already commanded to be “introduced to him, and by the age of ten if they are unwilling to continue with the “introduction”, they are beaten “till they get their minds right”. How’s that for “practicing positive communication”?

In today’s Helsingin Sanomat (subscription only), reporter Jenni Virtanen, interviews the Turkish born chief designer, Melih Kesmen, who offers a window into the reasons of why he started his business.

Translation: Turkish born Melih Kesmen is tired that talk of Muslims is only centered on hate and aggressiveness. He is especially tired of the claim that Muslims do not have any sense of humour. Kesmen, a student of graphic design living in Germany fights against images with his pictures on chests. Kesmen had the first shirt on in London in 2005, when the Jyllands-Posten published the disputed cartoons of Muhammed. The shirt read: I love my prophet Muhammed. The selection of shirts began to grow and in October of 2007 the shirt store became a chain. StyleIslam was born.It’s another powder puff article about Islam by the HS, and it looks like the study done by Finnish researchers on Islam’s negative image in the Finnish media last year, has had an impact on the HS. What that all means is, the HS, as well as other Finnish media organizations will be seeking out seemingly positive stories about Muslims and Islam, in order to counter-balance the murder and mayhem being committed by their co-religionists around the world. That also means the Finnish media will be making the conscious decision not to ask any hardball questions, or the necessary follow up questions to answers that reek of dissembling, obfuscation or outright lying. Great. Now the article (unintentionally for sure) closes in on the graphic designer’s true motivation which reveals his Islamist mindset (knowingly or not):HS: Vaikka Kesmen haluaakin rauhaa ja yhteisymmärrystä, t-paitapaja sai alkunsa vihasta.
“Jyllands-Postenin sarjakuvat tekivät minut vihaiseksi. Tai eivät sarjakuvat, vaan niiden tarkoitus. Sananvapaus tuntui olevan vain veruke. Tuloksena länsimaiden ja muslimien välit kiristyivät entisestään”, Kesmen kirjoittaa sähköpostihaastattelussa. Translation: Even though Kesmen wants peace and general understanding the T-shirts got its beginnings in anger (or rage). “Jyllands-Posten cartoon series enraged me. Or not the cartoons, but their intentions. Freedom of speech feels like only an excuse. As a result the differences between western countries and Islam have become more strained than ever, wrote Kesmen in the email interview.”Kesmen’s views about the reasons why the Jyllands-Posten Mo-toons were published in the first place, are very much like the ones held by the enraged mobs seen in Pakistan, Afghanistan and around the Islamic world, in spite of his living in Germany. Cognitive dissonance immediately comes to mind. He’s enraged because his religion is being ridiculed, criticized or being brought to task for its intolerance and intimidating methods that try to keep any such criticism from ever materializing.The supposedly “westernized” Melih Kesmen is no better than the Islamists who want to institute sharia law where ever Islam claims an outpost. Of course the HS’s journalist chooses to take a pass on the opportunity to question her about these important issues, because softballing any Muslim interviewee is the prime directive of the paper. That kind of policy will really deliver one skewed story after another for the reader of the paper. How nice is that? *L* KGSNOTE: Blogger Pikkupoika leaves in the comments a link to an article from April of this year, in which the same person was interviewed. Both the articles are pretty much the same, so I wonder if the journalist even interviewed Kesmen at all, and just cherry picked the story?