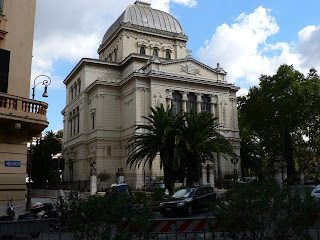 Yesterday the Jewish community of Rome celebrated ‘Yom Hazmaouth’, Israel’s Day of Independence with singing and dancing in the streets of the Jewish ghetto.

“ANSA: After a religious function in the synagogue the festivity will take to the streets of the ghetto with songs, dances and stalls. Mayor Gianni Alemanno and president of the province Nicola Zingaretti have already confirmed their participation and we have also invited president of the region Piero Marrazzo,” president of the Jewish community of Rome, Riccardo Pacifici, explained.

Pacifici also announced that tomorrow a large delegation of Roman Jews will go at the Turin Book Fair, “We will be hundreds to say ‘long live Israel’ and ‘thank you Napolitano’, who with his presence softened the polemics answering in this way to the attempts of boycott”.

The boycott, which was supported by the Swiss Islamist professor, Tariq “Taqiyya” Ramadan, aimed to keep people away due to the state of Israel being represented as the guest 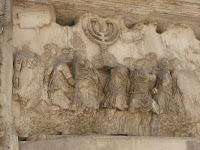 of honor at the Turin book fair which the Tundra Tabloids has reported on from time to time.

The city of Rome has been the home of Jews since the time of the Roman empire, when tens of thousands of Jewish slaves were brought there after the fall of the Romans destroyed Jerusalem and the Second Temple.

The picture on the right was taken last year when the Tundra Tabloids was visiting in Rome. The Bas-Relief is from the Column of Titus which depicts the religious vessels taken from the Jewish Temple in Jerusalem and carried off to Rome.

One other interesting aspect to the story of the boycott of Israel by various Arab agitators, was the recent announcement by Italian Islamic religious community vice-president Yahya Pallavicini, that “I express my complete solidarity with Italy’s president of the republic, Giorgio Napolitano, on behalf of COREIS, and also with the Turin book fair’s director, Ernesto Ferrero,”

Pallavicini’s comments came after a prominent Muslim academic, Tariq Ramadan, criticised Napolitano’s attendance at the opening of the Turin book fair.Napolitano was “proving with his presence that it is a political rather than a cultural event,” Ramadan said.

To mark the 60th anniversary of the Jewish state on Thursday, the Turin book fair – Italy’s most prestigious – has made Israel guest of honour at this year’s event, drawing criticism from the Italian left and some Muslims.

Ramadan also accused Napolitano of “the mistake of accusing anyone who criticises Israel of anti-semitism,” claims that were rebutted by the Italian presidential palace in a statement on Monday.”Criticism of the Israeli government’s policies is wholly legitimate, first and foremost from within Israel.

What is unacceptable is any denial of the legitimacy of Israel, which was born of the will of the United Nations in 1948, and of its right to exist in peace and security,” said the statement. Ramadan earlier this year called for “whoever has a conscience,” to boycott this year’s Turin book fair.

Tariq “Taqiyya” Ramadan has been proved to have been a spreader of false rumours (outright lying) more than once in regards to the Magdi Allam incident, which has considerably nicked away at his credibility as an honest academic. So let ol’ Silver Tongue spin his words of poison, the more he opens his mouth (thereby sticking his foot into it) the better.
Kudos to the Mayor of Rome and to the organizers of the Turin book fair, for not caving into the bigots. Perhaps this is a sign that rational and reasonable people will not remain silent, nor be intimidated. How refreshing. *L* KGS