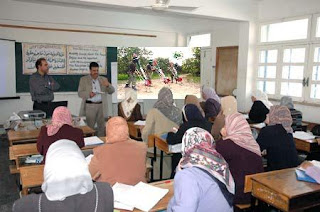 Like this would come as any surprise, but oh well, it’s news worthy nonetheless.

BY DAY, Awad al-Qiq was a respected teacher and headmaster at a United Nations school in the Gaza Strip. By night, he built rockets for Islamic Jihad.

The Israeli air strike that killed the 33-year-old last week also laid bare his apparent double life and embarrassed a UN agency that has long had to reject Israeli accusations that it has aided and abetted guerrillas fighting the Jewish state.Students and colleagues, as well as UN officials, denied any knowledge of Qiq’s work with explosives. And his family denied he had any militant links, despite a profusion of Islamic Jihad posters at his home.

But militant leaders allied to the enclave’s ruling Hamas group have hailed him as a martyr who led Islamic Jihad’s “engineering unit” – its bomb makers. They fired improvised rockets into Israel in response to his death.

Qiq’s body was wrapped in an Islamic Jihad flag at his funeral, posters in his honour still bedeck his family home and a notice posted on the school gate declared that Qiq, “the chief leader of the engineering unit”, would now find “paradise”.

The poster was removed soon after reporters visited the Rafah Prep Boys School, run by the UN Relief and Works Agency for Palestinian refugees. Staff there said yesterday that UNRWA officials had told them not to discuss Qiq’s activities. No-one from the UN attended the funeral or has paid their respects to the family, relatives said. The Israeli army said its 30 April attack at Rafah, close to the Egyptian border, hit a workshop used for making rockets and other improvised weaponry. An Israeli intelligence source said Qiq was involved in developing rockets and mortars.

Yet Qiq, a physics graduate with eight years’ experience of teaching at UNRWA schools, was also described by colleagues as a rising star in education. Relatives said he was promoted to run the school last year, with the title of deputy headmaster. The Qiq case highlights the complexities of life among the 1.5 million people of the Gaza Strip, where close to half voted for Hamas in 2006.

The UN wouldn’t want anyone to know that they have terrorists on their payroll, now would they? Just as they didn’t want to acknowledge the UN administered “refugee” camps in Jenin were terrorist strong holds. More here. *L* KGS