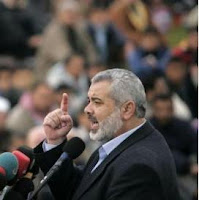 How often have we seen this? Israel shows restraint while being pummeled by hundreds of Kassam rockets, then finally takes some action. Only then do the Arabs begin hinting of a possible “truce”.

“Officials in the Israeli prime minister’s office reacted coolly yesterday to an indirect offer by Hamas for talks on a truce.
The offer was relayed through an Israeli reporter, Sleman Shafhe, of Israel’s Channel 2 television station.

On the main news broadcast on Tuesday night, Shafhe said that Ismail Haniya, the leader of the Hamas government in the Gaza Strip, had called him and sought to convey a message to the Israelis. According to Shafhe, Haniya said that he had the will and the ability to stop the rocket fire directed at Israel from Gaza, on condition that Israel stops killing Palestinians there and lifts the economic blockade of the strip.”

So there you have it, a clear admission that nothing happens in Hamastan without the Hamas’ full approval. Regardless of whether it’s Islamic Jihad or a host of other Pali terror groups, Hamas runs the show. It’s incredible to hear western analysts claiming Hamas “has shown restraint in the past”, and are therefore “pragmatic” when they want to be, all the while they supply logistics and tactic approval to the “others” firing rockets into Israel. Only fools believe in something that has been shown to be false. More here. *L* KGS