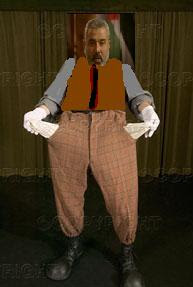 No matter how you slice it, or divvy it out, it’s not a good idea to pump more money into the Palestinian Authority Mess until they begin to realize that a “greater Palestine” is no longer an option. The majority of Palestinians still cling to the idea that their dream of a world without a Jewish state is still a worthwhile project.

“Hamas-ruled Gaza will likely see little of the unprecedented $7.4 billion in aid promised to the Palestinians by the international community on Monday. While donor countries say they won’t ignore the growing suffering in that isolated territory, they don’t seem eager to channel large sums there that could inadvertently help prolong Hamas rule.

Still, the Islamic militants, pushed further into a corner, could emerge as perhaps the biggest spoiler of the renewed Israeli-Palestinian peacemaking that the economic aid is meant to buttress. Hamas has successfully derailed past peace efforts with attacks on Israel. A barrage of rocket attacks could provoke the Israeli military into invading Gaza.”

I just do not trust those handling the money, as in times past, aid money has filtered its way into the hands of the terrorists. Another point is, Hamas is not the biggest spoiler in the so called, “peace process”, the Palestinians themselves are. Annapolis was a still born intitiative before it was even suggested. More here. *L* KGS