The NYT no less had a description of Dr.Keshavarz-Nia as “The Smartest Person in The Room”. The man is not a slouch, but a real expert with lots of clout and signed a sworn affidavit. He WILL be taken seriously.

As the mainstream media stakes what remains of its public trust and credibility on mocking “typos” in famed attorney Sidney Powell’s blockbuster lawsuits which allege that Donald Trump was defrauded in the 2020 election, evidence of foreign interference and Dominion vote-counting machine hijinks go unremarked upon.

One affidavit in the case is from a CIA-NSA-alphabet agency cybersecurity contractor guru who, just a few months ago, was praised in the New York Times and the Washington Monthly as a “hero,” for helping expose a multi-million dollar national security scam.

In “The Spy Was a Grifter” in its September 17th issue, The Washington Monthly wrote of Dr. Navid Keshavarz-Nia:

“Navid Keshavarz-Nia was another hero. He had done cybersecurity and technical counterintelligence work for the C.I.A., N.S.A., and F.B.I.”

At around the same time, the New York Times wrote of Keshavarz-Nia’s role in exposing the scandal:

“Navid Keshavarz-Nia, those who worked with him said, “was always the smartest person in the room.” In doing cybersecurity and technical counterintelligence work for the C.I.A., N.S.A. and F.B.I., he had spent decades connecting top-secret dots.”

Keshavarz-Nia, now one of Sidney Powell’s witnesses in the Georgia “Kraken” lawsuit, says in an affidavit under penalty of perjury that:

“I conclude with high confidence that the election 2020 data were altered in all battleground states resulting in hundreds of thousands of votes that were cast for President Trump to be transferred to Vice President Biden.” 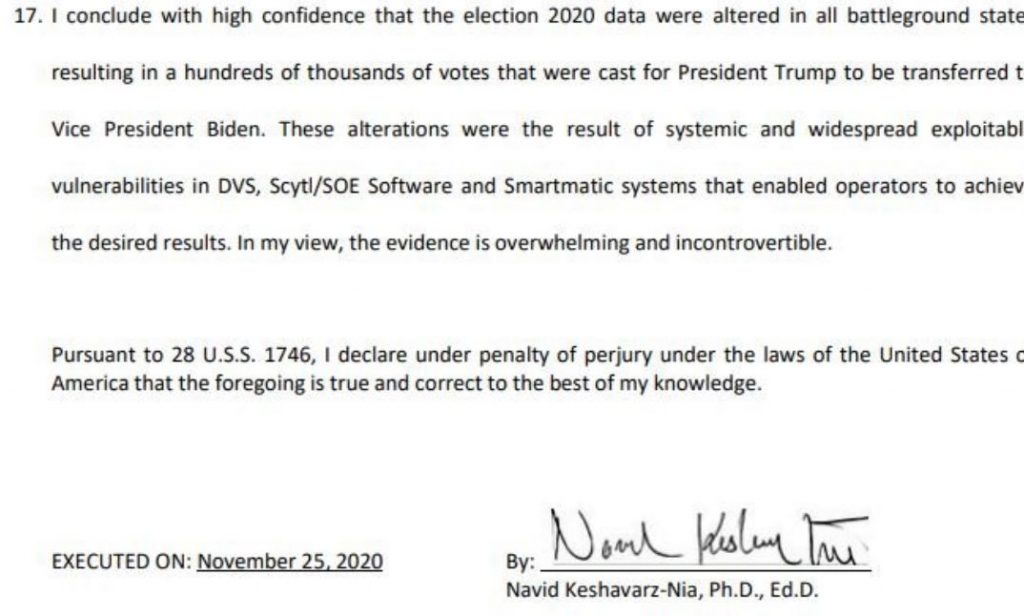