This is what a responsible government is supposed to do, protect its civil society… 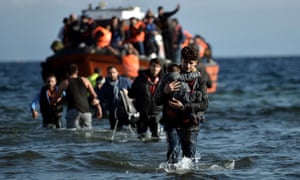 The Greek government has announced emergency measures to deal with what it calls “huge waves” of asylum seekers arriving from Turkey amid mounting fears of the 2015 migrant crisis being replayed on the country’s shores.

With boatloads of men, women and children once again arriving on Aegean islands, the new centre-right administration vowed to bolster patrols along sea borders that are being targeted with renewed vigour by people-smugglers.

“We are seeing huge waves being brought in by traffickers using new methods and better and faster boats,” the country’s civil protection minister, Michalis Chrysochoidis, said after the measures were announced at the weekend.

“If the situation were to continue we’d have a repeat of 2015. We are going to take measures to protect our borders and we are going to be much stricter, much faster in applying them.”

He added that the Greek government would also appeal to Nato and the EU to help step up patrols in the area.