Iran has to be permanently checkmated….

No Peace, No War in the Gulf

by Jonathan Spyer
The Australian
August 10, 2019 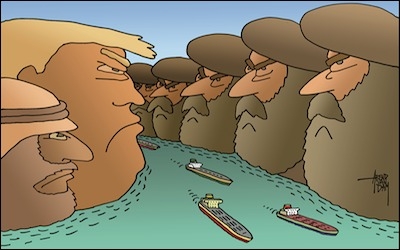 The impounding by Iran this week of another oil tanker making its way through the Strait of Hormuz is a reminder that the crisis in the Persian Gulf is far from over.

The Fars News Agency, which is associated with the Iranian Islamic Revolutionary Guards, claimed that the ship was Iraqi and carrying 700,000 litres of diesel fuel to an Arab country. Iraq has denied any knowledge of the craft.

This incident is the latest link in a chain of events that have brought the Gulf waterways (and Iraq) to a heightened state of tension not seen for several years. There are fears the standoff could deteriorate into an open armed clash between the US and Iran.

Events in the Gulf are part of a larger fraught reality in which Iran’s main regional enemies, Israel and Saudi Arabia, are engaged in an undeclared conflict with Tehran. Tehran and Washington have mutually irreconcilable objectives regarding the Gulf, Iraq and the broader Middle East region. At the same time, neither side is seeking immediate confrontation.