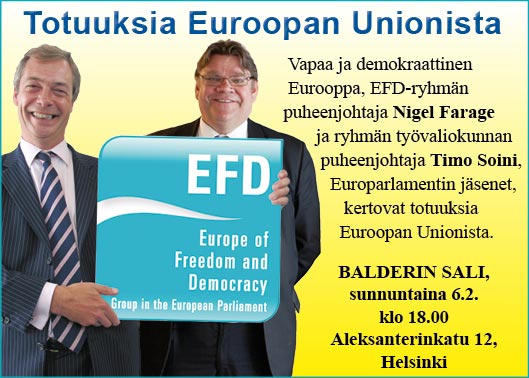 The Finns Party had a major revolt almost two years ago with Timo Soini and a number of PS MP’s in parliament going along with him. The Finns Party (what Pipes calls ‘civilizationalist’ parties) are pressing ahead and have not lost any more support than what they had at the time of the ‘big hijra’, in fact, they’ve had moderate gains. So regardless of what you may hear, that Farage is UKIP and UKIP is Farage, the same was said about The Finns party’s Timo Soini. They’re still here and making headway.

Brexit leader and President Trump confidant Nigel Farage has announced he is leaving the UK Independence Party (UKIP), the British political force he led on-and-off for nearly a decade over decisions by its new leader Gerrard Batten.

Announcing his departure on his LBC talk radio slot Tuesday evening, Mr Farage reflected on his time in UKIP which he said he had joined in 1992 when it was known as the Anti Federalist League.

Calling current leader Gerard Batten’s decision to bring English Defence League founder and street organiser Tommy Robinson into the party “catastrophic”, Mr Farage said of the work he had done as leader to see that UKIP discussed difficult topics without straying into extremism. He said:

One of the keys to [UKIP’s success in bringing about the 2016 referendum] was talking about things that everyone else wanted to brush under the carpet. Issues like immigration, which we were told that if you talked about that, it was somehow disreputable. I made sure that UKIP talked about tough issues, but we absolutely excluded anybody who’d ever been a member of the British National Party, the English Defence League, we wanted to make sure that when the abuse was thrown at us it couldn’t possibly be proved to be true.

I’m afraid that over the course of the last few months under this leader, Mr Gerrard Batten, a lot has changed. He seems to be pretty obsessed with Islam, not just Islamic extremism, but Islam. UKIP wasn’t founded to be a party on fighting a religious crusade… [Robinson] brings with him a group of people among which we see scuffles, violence, many have criminal records — some pretty serious. All of this drags UKIP away from being an electoral party, to a party of street activism.

I wrote ten days ago that this direction was catastrophic, especially at a time the great Brexit betrayal is upon us.