A Helsinki prosecutor is calling for prison sentences ranging from 1.5 to two years for three men accused of terrorism-related crimes. The men are believed to have conned tax authorities to fund purchases of military clothing and gear, established a bogus charity to collect clothing and downloaded online military training material from the Defence Forces and elsewhere on the internet. 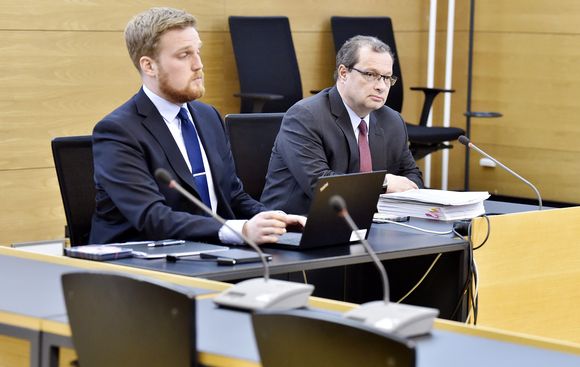 A preliminary hearing for the trial of three men accused of plotting crimes with a terrorist intent began Tuesday in the Helsinki District Court. The accused are believed to have scammed tax authorities to fund clothing and equipment for their planned military campaign as foreign fighters backing rebels in the Syrian conflict.

They also allegedly set up a bogus charity to collect clothing to take to Syria, developed video material for recruiting and training volunteers and downloaded military training material from the Finnish Defence Forces website and other sites on the internet.

According to the prosecutor, at the beginning of 2013, the men began plotting to join the terrorist group Katibat al-Muhajireen, which was battling Syrian government troops at the time.

All three have been charged with plotting to commit crimes with a terrorist intent.

One of the men has been slapped with additional charges of providing training for the commission of terrorist offences, and another was also charged with recruiting to commit terrorist crimes.

The prosecutor wants the court to convict the men and sentence them to custodial prison sentences of one year and six months, one year and nine months and two years. All of the accused have denied committing any offences.

Call to battle in Syria

In July 2013, the suspect accused of recruiting others to commit terrorist crimes, had recorded a video titled “Call to Syria“, in which he spoke of a holy war or jihad.

In the recording, which was made in cooperation with the extremist organisation Islamic State, a group commander appears with a gun in his hand, issuing a call to Muslims in Arabic to help the people of Syria.

In the video, the commander stressed that the message was especially directed to his Muslim brothers in Finland. The accused allegedly translated the material into Finnish and uploaded the video to YouTube.

According to the prosecutor, the purpose of the video was to recruit people from Finland to join terrorist groups fighting against the Syrian government.

The accused admitted to recording the video. However he denied that the person appearing in the short film was a member of a terrorist group or that he was urging viewers to terrorist action.

Funding for terrorism from financial crimes

The prosecutor charged that in collaboration with two other people, the trio had drawn up a plan for killing or at least maiming Syrian government troops in battle.

He added that the men had funded trips to Syria by setting up companies that they used to defraud the tax authorities by filing false claims for Value Added Tax refunds.

In 2013, the men are believed to have used the proceeds from the financial scam to purchase military clothing and equipment such as weapon bags, bullet-proof vests, light boosters and night-vision binoculars.

One of the accused and two other men had established an association called Northern Relief, in whose name they collected clothes and other items to take to Syria.

According to the prosecutor, the activities undertaken in the name of the association were not comparable to those of aid agencies operating in Syria.

The suspects learned that that their local contact in Syria, a man who had previously travelled to Syria from Finland, had been killed in battle the previous week. The prosecutor argued that this was the reason their plan was never put into action.

The prosecution further alleged that the man who had established the Northern Relief organisation had downloaded from the internet different lessons on military training and firearms use.

The prosecutor said that the defendant’s intention was to provide training to Katibat al-Muhajireen insurgents.

A memory stick confiscated from the man’s home contained material downloaded from the website of the Finnish Defence Forces, as well as files with rules for the training and conduct of Muslim fighters.

According to the prosecutor, the material was easy to adapt for training in the basic skills required for combat. The accused allegedly took the material with him to Syria. However the training never took place due to the death of his contact person.