What’s stunning to me is that they’re insisting that the Hamas-Fatah hook-up only comprised a small portion of the overall event, so there’s no harm, no foul done.

Contrary to the information that what was presented in public, in question was not only a meeting between Hamas and Fatah. The majority of the participants of the meeting were representatives of civil society. At the meeting attended, for example, were women’s organizations, youth movements, policy analysts, and other opinion leaders, who are currently outside of political decision-making.

My initial thought was that they would deny that Hamas had ANY representatives there at the event, but CMI admits that they were there, but only as one out of many representatives of Palestinian society. What’s probably more closer to the truth,  is that the Swiss, who have been keen to negotiate a coalition ‘unity’ government with Hamas and Fatah for a long time, now use an umbrella meeting as a thin veneer to get Hamas and Fatah reps to sit around a table, while the other groups present sit in their ‘workshops’ and sip coffee.

CMI is trying to pull the wool over a lot of people’s eyes with this one, having been caught, they now try to minimize the role they played as well as the true intention of the event. It’s all about the ‘Palestinian civil society’, though that society is controlled with an iron hand by both Fatah and Hamas. So much for a civil society even being in existence at all, let alone Arab NGO’s being able to influence it. This is all blue smoke and mirrors.

NOTE: Ahtisaari is a big believer in the outrageous myth that Israel holds the keys to Middle East peace.

Professor in Israeli paper: Ahtisaari’s organization could have broken the law on terrorism

According to NGO director, Professor Gerald Steinberg, terrorists could use the activities of NGOs to protect themselves. 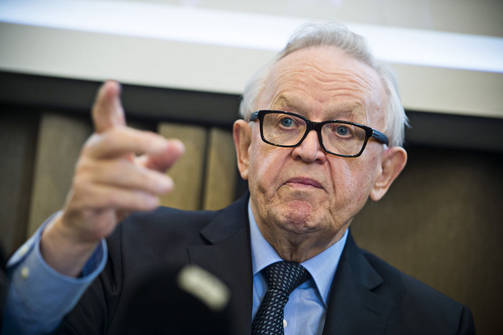 President Martti Ahtisaari -led crisis management organization, CMI has acted as a mediator between Fatah and Hamas, a terrorist organization.

Non-governmental organization established in Jerusalem, Professor Gerald Steinberg said to the Jerusalem Post publication, that he thought the way the European authorities use the funding for non-governmental chaos in the Middle East is of great concern.

– This is a new form of colonialism, as in this case, where the Finnish and Swiss governments are involved. This case shows that terrorists can use the activities of NGOs to protect themselves, and there is no excuse for it, Steinberg said.

The professor maintains that the argument that such activities contributes to peace, is both morally unacceptable and unfounded. Decades of talks between Fatah, Hamas and the Palestine Liberation Organization, or PLO have not, according to Steinberg, produced the desired results. Instead, negotiations have used millions of euros of taxpayers’ money, and it is also very possible that the terrorists use it as a template.

The promotion of peace

According to CMI, the purpose of the informal meeting held in Switzerland was to build up confidence between the Palestinian factions.

– The purpose of the meeting is to increase unity in the area. The objectives are in line with international law and UN resolutions, the CMI said in a statement.

Contrary to the information that what was presented in public, in question was not only a meeting between Hamas and Fatah. The majority of the participants of the meeting were representatives of civil society. At the meeting attended, inter alia, women’s organizations, youth movements, policy analysts, and other opinion leaders, who are currently outside of the political decision-making.

The  largest contributor to the meeting was the Swiss Foreign Ministry. CMI’s financial support for the meeting came from private sources, not from the Finnish state.

CMI believes that increasing consensus and broad participation of civil society in improving the conditions of democracy, alleviate tension and therefore increase the prospects for peace throughout the Middle East.