I may have some difficulties with Trump (along conservative lines) but his being smeared as racist and Jew hating is beyond the pale. 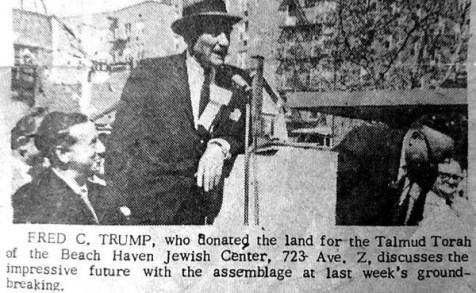 Israeli media have reported several important donations made in years past by both the late Fred Trump and his son, now President Elect Donald Trump.

Some 50 years ago, real estate developer Fredrick Trump donated the land for the Talmud Torah of the Beach Haven Jewish Center at 723 Ave. Z in Flatbush, NY, as can be seen from a promotional image released by that institution. The center is open and active to this day, offering programs for youth and the elderly, as well as an active synagogue.

And Fred’s son Donald, as reported by Yediot Ahronot, donated heavily on both occasions when Israelis who had been expelled from their homes by their own government needed assistance to resettle.

Donald Trump donated in the 1980s, to help build new infrastructure for the Israelis removed from the northern Sinai by the Begin government, which returned the peninsula to Egypt as part of the peace agreement. Then, in 2005, Trump gave again, to help resettle the Jews of Gush Katif in the Gaza Strip, exiled by the Ariel Sharon government.