Teuvo driving while Jussi is smiling…. 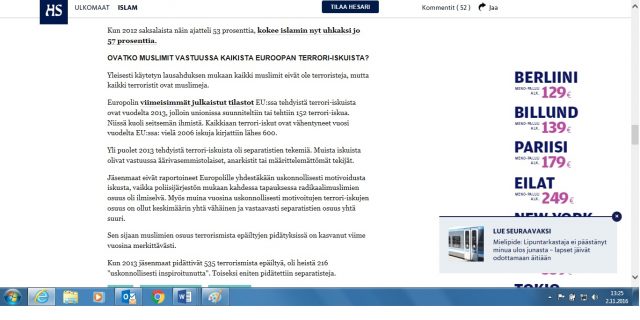 Helsingin Sanomat published the same sentence in an earlier article, word for word, that Teuvo Hakkarainen is accused of on Facebook.

MP Teuvo Hakkarainen is accused of ethnic agitation because of a Facebook post that he released soon after a terrorist attack that occurred during the summer in Nice, France.

According to Deputy Prosecutor Raija Toiviainen, being a MP does not include the right to “hate speech”, which is generally directed to all Muslims and is likely to arouse contempt and even based on religious intolerance, and hatred of the Muslim people as a group.

Hakkarainen was shocked by the terrorist attack

The French authorities have confirmed that the Tunisian Mohamed Lahouaiej-Bouhlel  was behind the attack in Nice, who was killed during the attack. The terrorist attack took the lives from at least 85 victims.

Shocked by the terrorist attack Hakkarainen once again brought up on Facebook the unquestionable connection between Muslim immigration and several recent terrorist attacks, with words which he was charged for.

In broader terms, the situation Hakkarainen is in seems very strange. Finland’s biggest newspaper Helsingin Sanomat published last year on its website an article “Are all terrorists are Muslims? – six questions of terrorism, and the European Muslims” (21.1.). The article contained statistical information on the European Muslim population, and the text also linked Muslims to terrorism.

Helsingin Sanomat published in an article word for word the same sentence, which Hakkarainen is accused of ethnic agitation. Helsingin Sanomat even says that the adage is a “commonly used phrase”.