The fraud that is islam.

Held up to the same scientific scrutiny as other faiths have been, and the koran falls apart like a house of cards in a sand storm.

“If the [carbon] dates apply to the parchment and the ink, and the dates across the entire range apply, then the Koran — or at least portions of it — pre-dates Muhammad, and moves back the years that an Arabic literary culture is in place well into the 500s.

“This gives more ground to what have been peripheral views of the Koran’s genesis, like that Muhammad and his early followers used a text that was already in existence and shaped it to fit their own political and theological agenda, rather than Muhammad receiving a revelation from heaven. Fragments of an early Koran found in a Birmingham library may rewrite Islamic history after carbon dating revealed they could be older than Mohammed.

Scientists at the University of Oxford had already revealed that the parchment was among the oldest known Koranic texts in the world, but now several historians say it could be so old that it pre-dates the Muslim prophet, thus contradicting traditional accounts of his life and radically altering “the edifice of Islamic tradition.”

Some academics now say that the impact of the text could be comparable to finding a copy of the Gospels dating back to before the time of Christ.

Historian Tom Holland told the Sunday Times that evidence was now mounting that traditional accounts of Islam’s origins are wrong.

“It destabilises, to put it mildly, the idea that we can know anything with certainty about how the Koran emerged — and that in turn has implications for the historicity of Muhammad and the Companions [his followers],” he said.

Other very old Korans also seem to confirm that written texts were circulating before Mohammed’s death.

Needless to say, Muslim academics have disputed the claims. Mustafa Shah of London’s School of Oriental and African Studies (SOAS) said: “If anything, the manuscript has consolidated traditional accounts of the Koran’s origins.”

Meanwhile, Shady Hekmat Nasser from the University of Cambridge said: “We already know from our sources that the Koran was a closed text very early on in Islam, and these discoveries only attest to the accuracy of these sources.”

Dr Keith Small, a Koranic manuscript consultant at Oxford’s Bodleian Library, admits the carbon dating applies to the parchment, not the ink, while the calligraphy is characteristic of a later style.

Nevertheless, he believes the dates are probably correct and could raise serious questions for Islam.

NOTE: Muslims so enraged over the news they’re burning korans faster than the local suq can sell them! 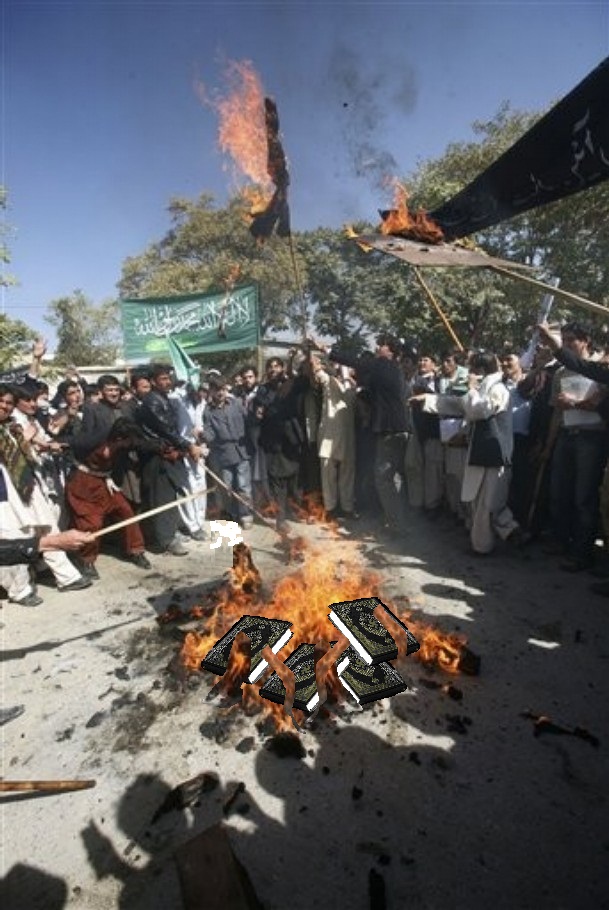