Orthodox Bishop Mark (Arndt) is that rare example of a Christian hierarch speaking the truth about Islam. 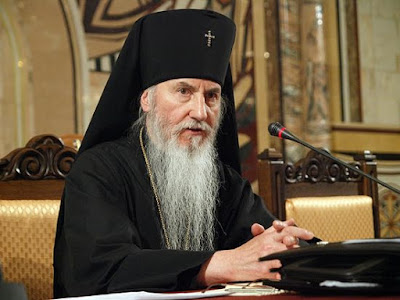 Islam is at its core anti-human… Reading the Quran, you will see that all of this [extremism] lies at the foundation of Islam. One must look truth in the eye: this is all anti-human, it is directed against humanity… Yes, there were times when Muslims tried to live in peace with their neighbors, they even acknowledged that we Christians are people, too. But for many, those times have passed, and now they reveal who they really are.

Regular readers of Jihad Watch are likely familiar with the refusal of Roman Catholic bishops to address the global issue of Muslim persecution of Christians and Jews (and other non-Muslims) and its grounding in the Quran and the example of Muhammad. The prime example may be that of Bishop Robert McManus of Worcester Mass., whose infamous quote reads more like a parody from the Onion every day:

Talk about extreme, militant Islamists and the atrocities that they have perpetrated globally might undercut the positive achievements that we Catholics have attained in our inter-religious dialogue with devout Muslims.

Pope Francis of course leads this disturbing trend, his Apostolic Exhortation Evangelii Gaudiumincluding the emphatic affirmation that  “authentic Islam and the proper reading of the Koran are opposed to every form of violence.”

It seems many Muslims have failed to read that particular epistle.