Time for an Article V meeting of the states to promote the reigning in of the federal government and the supreme court. Reversing this latest assault on religious liberty by a biased court is a must. 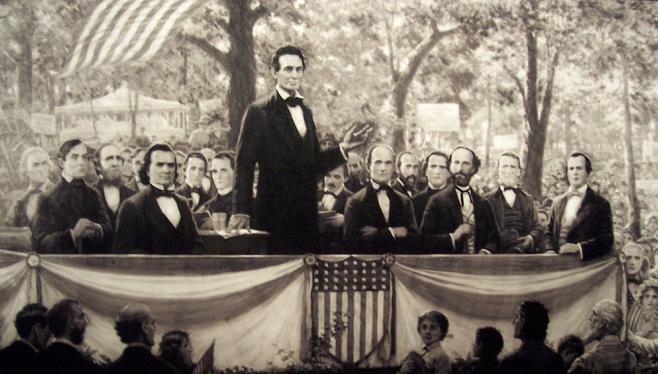 Call it the Dred Scotting of religious liberty.

Writing gay marriage into the Constitution as once there was a Supreme Court decision that attempted to write slavery into the Constitution. Make no mistake. Whatever else the five lawyers in black robes thought they were doing with their ruling on gay marriage, they have opened the door — many think the door was already open — for a full-blown assault on religious liberty.

Who better to look to for a response to the Obergefell v. Hodges decision than the man who earned his marble statue on the Washington Mall by opposing the idea that the Dred Scott decision should be regarded as “settled law”?

Substitute the Supreme Court’s ruling on gay marriage — which many Americans see as yet another assault on religious liberty — with the hotly controversial issue of the Court’s 1857 Dred Scott decision on slavery. Or the Court’s 1819 decision in McCulloch v. Maryland. The latter decision declared the Bank of the United States to be constitutional, the former was a deliberate attempt by Democrats on the bench to make slavery constitutional.

In June of 1857, the year before he would challenge Illinois Democrat and incumbent Senator Stephen A. Douglas for a seat in the U.S. Senate, Abraham Lincoln addressed the subject of Dred Scott and whether decisions of the Supreme Court should be challenged. Lincoln, was, famously, a lawyer and a good one. He revered the law. And up until the Dred Scott decision, issued by the Court months earlier in March of 1857, Lincoln was unhesitating in his support of judicial decisions. But deliberately, willfully inserting slavery into the Constitution — not based on the law but on the pro-slavery sentiments of the Court’s members, notably including Chief Justice Roger Taney — was a bridge too far for Lincoln. In writing his opinion on the case Taney had quite specifically made his bias plain, saying that African-Americans “had no rights which the white man was bound to respect.”

“So blatant was the Chief Justice’s misreading of the law, so gross was his distortion of the documents fundamental to American liberty [meaning the Declaration of Independence and the Constitution], that Lincoln’s faith in an impartial, rational judiciary was shaken; never again did he give deference to the rulings of the Supreme Court.”

Not only was Lincoln done with his faith in giving “deference” to the idea of “an impartial, rational judiciary,” he used his speech to tear into Douglas (whom he refers to always as “Judge Douglas” in reference to Douglas’s earlier title as a Justice on the Illinois Supreme Court) for Douglas’s hypocrisy on the issue. In the wake of Dred Scott Douglas was an enthusiastic supporter of the Court’s decision. Lincoln accused Douglas and Chief Justice Taney of, in Herbert’s words, “working, together with other Democrats, to extend and perpetuate slavery.” With the Dred Scott case decided and slavery now, supposedly, enshrined in the Constitution forever, Douglas wanted no one to tamper with it — much less try and undo it.