Islamic State mixes it up with its evil twin.

He either was killed by Hamas or blew himself up.
By: Tzvi Ben-Gedalyahu
Published: June 2nd, 2015 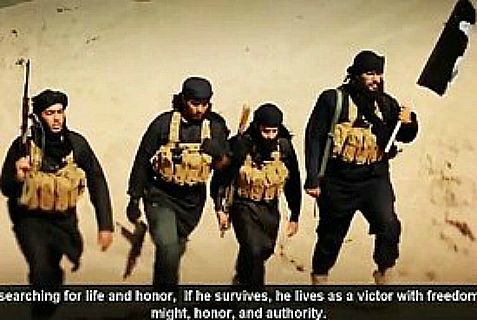 ISIS terrorists ready to blow themselves up.

A Salafist or an Islamic State (ISIS) terrorist either was killed or blew himself up in Gaza around noon Tuesday, according to several Twitter reports.

Hamas said the terrorist is the same who is responsible for several recent explosions in Gaza and that weapons were found in his home.

The JewishPress.com reported here earlier today that terrorists claiming to be part of ISIS have given Hamas a 48 hour ultimatum to halt its crackdown on them.

One of Tuesday’s tweets said he was an eyewitness and saw the suicide bomber who detonated his device when Hamas security forces approached to arrest him, but that doesn’t make sense. If he blew himself up, he would have wanted to take several people from Hamas with him, unless he wanted to deny them 72 virgins.

NOTE: No doubt he considers Hamas ”infidels”, so no virgins for them, it was more likely a premature detonation.