It’s tough being a two bit hack politico in sea of fellow travellers.

Will Clinton Show for Bibi? Elizabeth Warren’s (so far little known) outspoken support for Israel may be a factor.
By: Lori Lowenthal Marcus
Published: February 12th, 2015 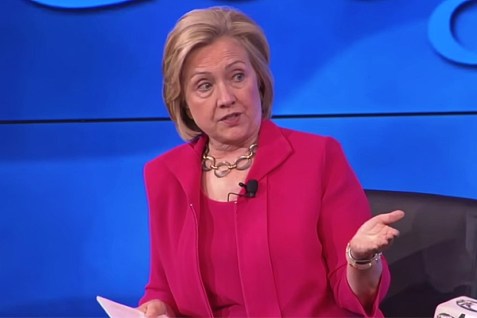 On Tuesday, Feb. 11, the Emergency Committee for Israel released a letter to Hillary Clinton, urging her to attend the Israeli Prime Minister’s speech to Congress, scheduled for March 3.  She may have to, given a new poll and pro-Israel competition from an unlikely source.

ECI, chaired by the Weekly Standard’s William Kristol, is a staunchly pro-Israel educational organization, which sees its goal as educating the public about “the serious challenges to Israel’s security and about what elected officials in this country are doing and should do in order to meet those challenges.”

Clinton is scheduled to be in Washington on March 3, the same date as Bibi’s speech, as ECI noted.

The former Secretary of State, New York Senator, and putative Democratic candidate for U.S. President, is being honored on March 3 by Emily’s List, a Washington-based advocacy group for pro-reproductive rights female Democratic candidates. It is the 30th anniversary event for the organization. Clinton will deliver the keynote address at the gala and will receive the “We are EMILY Award.”

Clinton’s Emily List event will be held at the Washington Hilton, just four miles from Capitol Hill. The gala program begins at 7:00 p.m. Netanyahu’s address to the joint session of Congress is likely to begin at 9:00 p.m., in order to reach the west coast after normal business hours.

Clinton is in a pickle.