More kneeling space for Muslims in their takeover over of Europe. 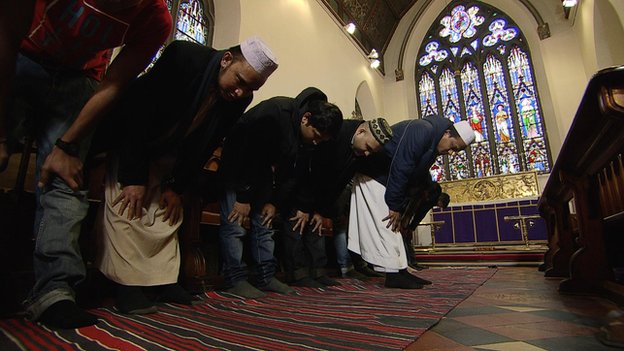 This is what happens to nations taken over first by Leftist maroons who successfully preached State churches are irrelevant (god is dead), all the while they busily import (yearly) hundreds of thousands of anti-Semitic Muslims from the Middle East and the Levant.

NOTE: It’s like their (the Left’s) decades old assault on marriage, it’s being highly irrelevant, all the while they demand that ”irrelevant’ institution to be open to homosexuals, in the final coup de grace act of redefining it altogether.

From the Wall Street Journal:

Two dozen scruffy skateboarders launched perilous jumps in a soaring old church building here on a recent night, watched over by a mosaic likeness of Jesus and a solemn array of stone saints.

This is the Arnhem Skate Hall, an uneasy reincarnation of the Church of St. Joseph, which once rang with the prayers of nearly 1,000 worshipers.

It is one of hundreds of churches, closed or threatened by plunging membership, that pose a question for communities, and even governments, across Western Europe: What to do with once-holy, now-empty buildings that increasingly mark the countryside from Britain to Denmark?

The Skate Hall may not last long. The once-stately church is streaked with water damage and badly needs repair; the city sends the skaters tax bills; and the Roman Catholic Church, which still owns the building, is trying to sell it at a price they can’t afford.

“We’re in no-man’s-land,” says Collin Versteegh, the youthful 46-year-old who runs the operation, rolling cigarettes between denouncing local politicians. “We have no room to maneuver anywhere.”

The Skate Hall’s plight is replicated across a continent that long nurtured Christianity but is becoming relentlessly secular.