But then again, he has sucked up to Islam in prior statements. 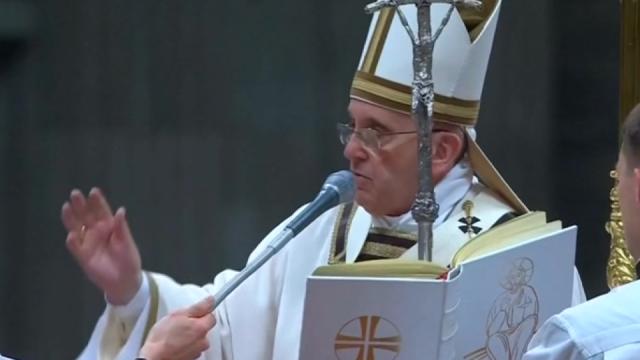 VATICAN CITY (Reuters) – Pope Francis on Thursday condemned the “brutal persecution” of minorities by Islamic State insurgents and said the joy of Christmas was marred by the suffering of children in the Middle East and around the world.

Tens of thousands of people flocked to St. Peter’s Square to hear the Argentine pope deliver his “Urbi et Orbi” (to the city and the world) blessing and message, marking the second Christmas since his election last year.

He condemned Islamic State fighters who have killed or displaced Shi’ite Muslims, Christians and others in Syria and Iraq who do not share the group’s ideologies.

“I ask him, the savior of the world, to look upon our brothers and sisters in Iraq and Syria, who for too long now have suffered the effects of ongoing conflict, and who, together with those belonging to other ethnic and religious groups, are suffering a brutal persecution,” he said.

Later he departed from his text and spoke emotionally of “children displaced due to war and persecution, abused and taken advantage of before our very eyes and our complicit silence.”