Remember folks, the Muslims try out their terrorism on the Jews first, (here) and then export it to the world.

From Vlad:  From Ouest-France

Monday evening a light truck plowed in the dense crowd at the Place Royale Christmas market in Nantes.

The police were immediately alerted by around 90 calls.

Eleven people were wounded, five very seriously and one is in critical condition. All the injured are in the CHU (hospital). 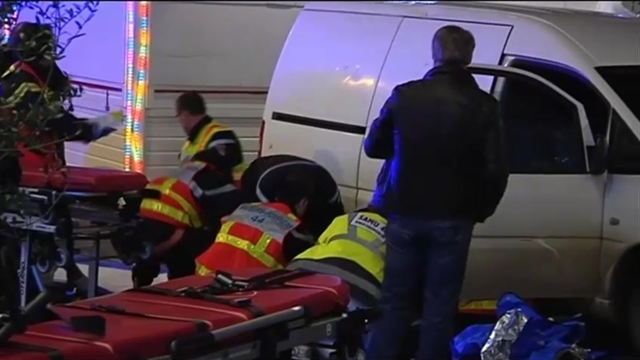 The Christmas market was evacuated and cordoned off by police

A van has been driven into shoppers at a Christmas market in the French city of Nantes leaving 10 people injured.

In two previous incidents over the weekend, attackers shouted “God is great” in Arabic, raising fears of copycat attacks.

In Nantes, the driver is said to have stabbed himself and officials said he appeared to be unbalanced.

President Francois Hollande has called for an emergency cabinet meeting and urged the public not to panic.

In Dijon on Sunday, a driver shouting “Allahu Akbar” ploughed his vehicle into pedestrians, injuring 13 people. On Saturday, a man using the same phrase was shot dead by police after attacking them.

The French authorities are reluctant to say anything to encourage the idea that there is any kind of pattern behind the three attacks.

For the first incident at the police station in Tours, it is clear that there was a religious motivation. The man left evidence of his conversion to extremist Islamist views.