Courtesy of Gates Of Vienna

Earlier today Geert Wilders, the leader of the Party for Freedom (Partij voor de Vrijheid, PVV) in the Netherlands, spoke at this year’s Restoration Weekend in Palm Beach. Below is the prepared text of his remarks.

Speech by Geert Wilders at the Restoration Weekend

It is always a pleasure to be in the United States. And it is an honor to be at Restoration Weekend again. Especially at this moment when a new Congress and a new majority in the Senate are preparing to lead this great country and change it for the better. 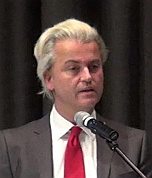 I am a politician from Europe. I am a member of the House of Representatives in the Netherlands and the leader of the Party for Freedom, the leading party in the Dutch opinion polls today.

Before I continue, let me tell you something about my life as a European politician. I am not a President, nor a Governor, nor even a member of Cabinet, just a member of Congress. For over ten years now, I have been living under 24/7 police protection. I lived with my wife in army barracks, prison cells and safe houses until this very day, just to be safe. Wherever I go, armed policemen accompany me to protect me against Islamic jihadis. Al Qaida, the Taliban, ISIS and many others threatened to kill me because I tell the truth about Islam and speak out against the Islamization of our free Western societies. In Europe we have made a terrible mistake. During the past decades, our politicians foolishly allowed millions of Islamic immigrants to settle within our borders. Everywhere the Islamic culture was welcomed as an enrichment. Nowhere the demand was made that the immigrants assimilate.

Not a single European leader had the guts to state the obvious and tell the truth: our Western culture based on Christianity, Judaism and Humanism, is far superior to the Islamic culture and immigrants have to adopt our values. And now, we in Europe are paying the price for this folly. Islam is eating away our Judeo-Christian and humanist civilization and replacing it with intolerance, hatred and violence. And our so-called leaders allow it.

25 years ago, the Berlin Wall fell and the Iron Curtain was dismantled. Thanks to President Ronald Reagan, America’s greatest and best President ever, the totalitarian ideology of Communism was defeated in Europe and my continent was liberated. But now another totalitarianism has nestled itself in the heart of Europe.

Last Summer, my home town, The Hague, witnessed scenes which brought back memories of the darkest period in our history, the Nazi era. Sympathizers of the Islamic State paraded in our streets. They carried swastikas, they carried the black flags of the Islamic State. They shouted “Death to the Jews” and “Oh Jews, the army of Mohammed is coming for you”. In the streets of The Hague in broad daylight. And instead of rounding up these hatemongers, the Dutch authorities did nothing.