‘Not guilty’ but up to her neck in the jihad.

“An ex-wife of Al-Shabaab leader lives in Finland. Didn’t know that… It comes out in this story which focuses on another Somali woman. It seems like there’s a lot more going on than we thought… So in other words, there has been a whole lot going on! several people have been suspected of sending money from Finland al-Shabaab. Crap, this whole story is revealing so much more information than what Iltalehti means to. Its evident now, that there are strong links between some Finnish muslims and al-Shabaab!

According to Islamic law, they (Muslims) have to send money for the jihad, 1/8 of the zakat, (alms) is automatically sent to those fighting in the jihad. Proceeds from halal sales goes to it as well. The following is a TT translation.

After three years of hell

Somali woman suspected of terrorism tells Iltalehti of her plight

Plain-clothes police knock on the door of Somali women living in the metropolitan area on 7 September 2011. 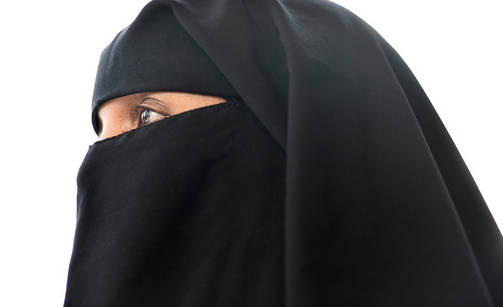 – I’ve had to carry all of my essentials with me in case the cops come and get me, the Somali says. (JARNO Juuti)

A knock began the torment that ended until three years later.

Deputy Prosecutor General Jorma Kalske and the State Prosecutor Juha-Mikko Hämäläinen outlined on 16 September 2014, that there isn’t a probable cause to suspect the woman accused of financing terrorism.

Iltalehti met with the released thirty something woman who was suspected of a crime at a restaurant.

The woman is accompanied with a lawyer who does not want her name to appear in the story, an interpreter and Finnish-speaking Somali.

The woman is dressed in a face veil, or niqab, which she did not previously use.

Because of suspicion of terrorism, the woman has become fearful, and she dares only to reveal to outsiders her eyes.

– Doctors may read from my face, that I have a problem. I do not have the courage to tell everyone what I have been suspected of, the woman says through an interpreter.

Why did the woman come to the authorities attention?

– Do I have to answer? I am not connected to the story in any way, I am innocent, the woman says.

In the reading of the decision not to prosecute, it was revealed that the woman knows the man who is alleged to be the leader of the al-Shabaab organization, as well as being his ex-spouse living in Finland.

According to attorney Matti Nurmela, the woman knows these people and has been in text messaging with them, but is not aware of the people’s background.

Prosecutors view is slightly different: according to them, the woman has been aware of the nature of the activities of the al-Shabaab-organization, as well as its the persons supporting it.

Pre-trial investigation could not “obtain evidence to support the assertion that the remittance would be intended for the al-Shabaab’s use”.

The woman said that the money had been allocated to her cousin, who needed money for debt payments.

Back in September 2011 a plain clothes policeman came to the woman’s apartment. Police officers overwhelmed the apartment through the balcony. A camera on the home was installed.

The woman was caught, arrested and imprisoned for a month.

– I can not tell you in one sentence what it felt like.