It appears that even being a mouth organ for the Islamonazis isn’t enough! I called her an idiot and dangerous to Jews everywhere right to her face, I guess I was proven right! She’ll spin it in a way that smears Israel, but it’s outrageously hilarious that she got the boot from the very people she propagandizes for!

No doubt Finnish moonbat and continual bad hair day Helsinki University lecturer ”Syksy” Räsänen is in tears over the development.

Her colleagues and professors told her that she was being ejected on the one hand “for her own protection” and also to give the students “a safe space” free of Jews.

Israel should do to Amira Hass what the US did with Tokyo Rose. By Nir Har-Zahav and Tova Dvorin

A Haaretz reporter was ejected from a pro-Palestinian conference at Birzeit University on Saturday, reporter Amira Hass said – simply for being an Israeli Jew.

Hass attempted to attend the “Alternatives to Neo-Liberal Development in the Occupied Palestinian Territories – Critical Perspectives” conference at the university, which is located near Ramallah where she lives.

But she was ejected from the hall by the organizers, Hass claimed, after students at the admission desk noted she worked for the Israeli publication and alerted security authorities to intervene.

Birzeit University has had a policy of barring Israeli Jews from the campus for over 20 years, administrators said, and ejected her for fear that she would be attacked by an unruly mob of students.

Hass was not assaulted by Palestinian Arab students at the conference, she noted, but rumors did surface shortly afterwards of such a confrontation. 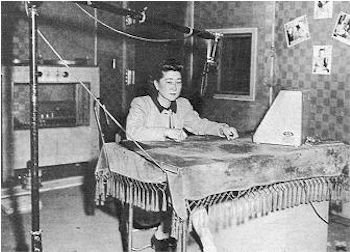