“The judge told me that I needed to convert to Islam,” she said. “And so these warnings made me anticipate I would be sentenced to death.” 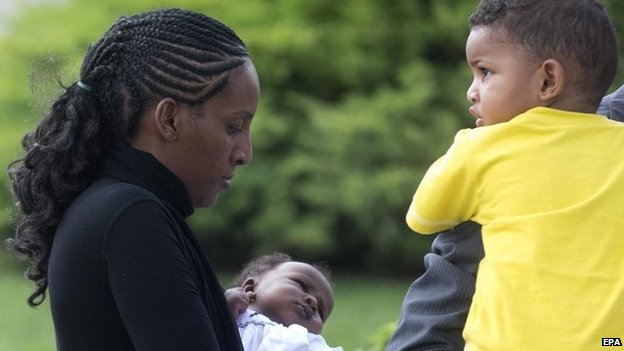 Mrs Ibrahim’s daughter Maya was born in prison in May

Mariam Ibrahim, the Sudan woman who escaped a death sentence imposed for renouncing her faith, says she wants to campaign for others who face religious persecution.

Speaking to the BBC in the US, where she is seeking asylum, Ms Ibrahim said she hopes to return to Sudan one day.

Ms Ibrahim earlier received an award from a US Christian foundation.

Her sentencing – by a Sudanese court that did not recognise her Christian faith – sparked outrage this year.

Under Sudan’s version of Islamic law, however, her father’s religion meant that she too was still technically a Muslim. A court found her guilty of apostasy, or renouncing one’s faith.

Sentenced to hang, she gave birth to her daughter while shackled in prison. Under intense international pressure, her conviction was quashed and she was freed in June.

She told the BBC that she had been threatened by the guards while she was in court.