50 Rebels killed in fighting in Syria

At least 50 rebels died on Tuesday and Wednesday in clashes with Syrian President Bashar al Assad’s forces, who are advancing toward the central prison in the northern Syrian city of Aleppo, the opposition Syrian Observatory for Human Rights said.

The insurgents were killed in bombardments and in fighting with the army, which is supported by members of the Lebanese Shiite group Hezbollah, in the industrial zone of Sheikh Nayar and near the Barich roundabout in the northern part of the city as well as near the prison, the London-based group, which has a large network of activists on the ground across Syria, said. 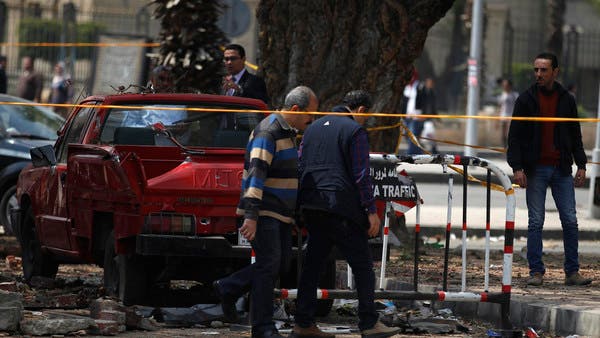 Egypt has been hit by a wave of violence, including attacks by Islamist militants based in Sinai on security forces, since the army ousted the elected Islamist president Mohammad Mursi in July. (File photo: Reuters)
By Ali Abdelatay, Reuters | Cairo
Thursday, 22 May 2014

One Egyptian was killed and nine others were injured in a bomb attack on Wednesday on a security vehicle in Egypt’s lawless Sinai Peninsula, near the border with Israel, security sources said.

Egypt has been hit by a wave of violence, including attacks by Islamist militants based in Sinai on security forces, since the army ousted the elected Islamist president Mohammad Mursi in July following mass protests against him.

Witnesses said Wednesday’s attack had been carried out by two men riding a motorcycle who threw a bomb at a security vehicle in the North Sinai city of al-Arish and fled.

ADEN: A shell smashed into a vehicle and killed five civilians on Thursday during clashes between Yemen´s army and Al-Qaeda suspects in the country´s restive south, witnesses said.

The incident occurred near Al-Saeed, an Al-Qaeda stronghold in Shabwa province, destroying the vehicle and killing all five people on board, the same sources said.

They identified the victims as members of the powerful Shabwa-based Awaliq tribe, from which US-born Al-Qaeda cleric Anwar al-Awlaqi, killed in a US air strike in September 2011, hails.

One witness said the “echo of the sound made by the shelling came from an army position”, as another spoke of a “mistake” by troops.

Attacks north of Baghdad killed 11 Iraqi soldiers on Tuesday, the latest in a protracted surge in bloodshed just a day after officials announced results from April’s parliamentary election.

Eight soldiers were killed and four were wounded, he said. The soldiers had been heading off on leave at the time.

Elsewhere, a vehicle rigged with explosives was set off by a suicide attacker in Salaheddin province, killing three soldiers and wounding seven.

22 Afghan Police Officers Are Killed in Attacks by Taliban

KABUL, Afghanistan — It was a particularly bloody Wednesday for Afghan police officers, as reports emerged that at least 22 had been killed in four assaults around the country by Taliban insurgents, who also pinned down 40 police officers and officials in a bunker, short on food and ammunition.

The insurgents boasted that their spring offensive was well underway, and said it proved they could disrupt the upcoming runoff election for president of Afghanistan — something  they failed spectacularly to do in the first round, on April 5.

In the worst-hit place, in northern Badakhshan Province, some Afghan officials complained bitterly that the American military failed to rescue them, despite an official plea for help.