How can the police protect us when they can’t even protect themselves? student asks

Cairo: An Egyptian police brigadier-general was killed in bombings outside Cairo University on Wednesday, the Interior Ministry said.

There was no immediate claim of responsibility for the attack but militants have carried out similar operations in a fast-growing insurgency threatening the security of the most populous Arab nation.

Two bombs, planted among trees outside the university, also wounded five from the security forces who had been guarding the facility, the ministry said.

The government this week put the death toll from such attacks at nearly 500 people, most of them soldiers and police.

Analysts expect militants to escalate violence ahead of the May 26-27 presidential election.

Abdul Fattah Al Sissi, the general who toppled Mursi, is expected to easily win the vote. 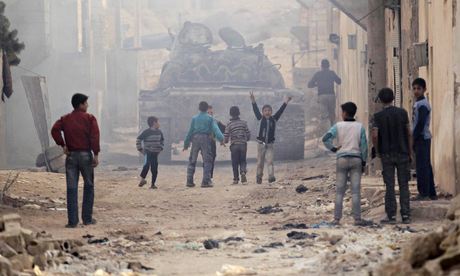 Children in Aleppo: UK-based human rights body says the number of deaths in Syria could be as high as 220,000. Photograph: Reuters

At least 150,000 people have been killed in Syria’s three-year-old civil war, a third of them civilians, the Syrian Observatory for Human Rights has said.

The UK-based Observatory, which monitors violence in Syria through a network of activists and medical or security sources, said the real toll was likely to be significantly higher at about 220,000 deaths.

Efforts to end the conflict by bringing together representatives of President Bashar al-Assad’s government and the opposition have so far failed. The United Nations peace mediator for Syria said last week that talks were unlikely to resume soon.

Wednesday morning, a suicide bomber blew himself up at the entrance to an army recruitment centre in northern Iraq, killing six would-be soldiers and wounding 14 others, a general and a doctor said.

The latest attack in Riyadh, in mixed Kirkuk province, along with violence elsewhere in the country that left two policemen dead, comes with the country suffering near-daily violence. Ramadi / NINA / Seven civilians were martyred and wounded on Wednesday evening by renewed shelling with artillery and mortars to the city of Fallujah.

A security source told the National Iraqi News Agency / NINA/ that the army artillery and mortar shelling renewed to the neighborhoods north and east of the city of Fallujah.

The source added that the bombing led to the killing of two civilians and wounding / 5 / others, including two children, were all taken to the hospital. / End A policeman killed, three others wounded by a roadside bomb west of Anbar Print Save

Ramadi / NINA / A policeman was killed and three others were wounded by a roadside bomb west of Anbar province.

A security source told the National Iraqi News Agency / NINA / that an explosive device was planted on the side of the highway near the city of Hit, exploded when a police patrol passed near it. Militants have killed at least six soldiers and two civilians in a raid on an army headquarters in southern Yemen, officials say.

The army says a suicide bomber in a bomb-laden car tried to storm the main gate of the base in Aden.

Militants in a second vehicle attacked the HQ with rocket-propelled grenades and automatic weapons, they said.

Al-Qaeda-linked groups have launched a string of attacks on Yemeni army posts in the past two years.

Hospital officials said at least three assailants also died in the subsequent shootout. A 10-year-old boy was also among the civilian casualties.

The Fourth Division of the Yemeni army is based at the headquarters and is in charge of the military in southern Yemen.

“The security guarding the Fourth Division headquarters in Aden foiled a suicide attack carried out by terrorist elements of al Qaeda who had detonated a booby-trapped car at the main gate,” the state news agency Saba quoted the source as saying. Islamabad, April 2 (IANS) At least two people were killed and 13 injured Wednesday in a powerful explosion near the Pakistan-Afghanistan border, police said.

The blast ripped through a private bank in the Vash Mandi area on the Afghan side of the border, Dawn online reported.

An Afghan police official requesting anonymity told the newspaper that militants had planted an improvised explosive device (IED) in a motorcycle parked outside the bank.

“The IED went off when a vehicle of Afghan police approached the bank,” the officer was quoted as saying.