Folks, there’s more to this than meets the eye. I advise that you take Dr.Trifkovic’s observations very, very seriously when arriving to some kind of understanding and position on the Kiev riots.

…we can no longer use the term “demonstrators,” I would rather use the term “rebels,” because we are looking at a de facto armed rebellion—lies with Ukraine’s opposition politicians, and first and foremost with the neo-Nazi party Svoboda which has been recruiting young men of a thuggish disposition in Lvov, Ivano-Frankovsk and other places. It has effectively provided logistic support to the rebels in the Maidan Square. 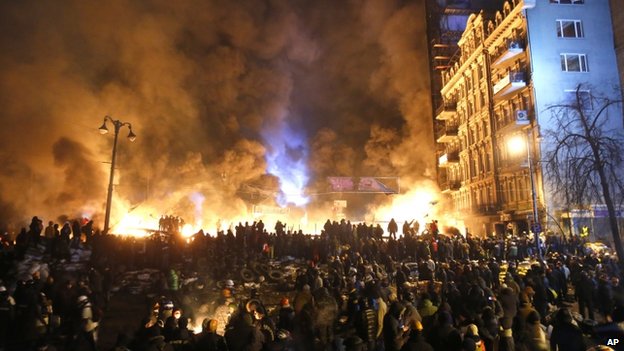 RT: In Ukraine there have been accusations of the use of live ammunition by both sides in the conflict. Protesters are well armed but it is unclear just where they’ve sourced their firearms from. They were also using grenades, fireworks and Molotov cocktails against law enforcers. Others threw rocks, wielded baseball bats and metal rods. Attempts were also made to ram trucks through police cordons. Let’s now get some analysis from Srdja Trifkovic, foreign-affairs editor for the Chronicles magazine. Mr. Trifkovic, we understand that the EU is talking about imposing sanctions on the authorities, or on those who are responsible for violence in Ukraine. Can we expect them to be fair? Can we expect them to single out who is behind the violence?

TRIFKOVIC:  Absolutely not. We have witnessed brazen hypocrisy from the European Union ever since the beginning of this crisis. Let us just remember the list of various EU functionaries and ministers from its member-countries, such as Poland, Germany and Lithuania, who went to Ukraine in December to harangue the demonstrators in Kiev. What we are looking at, objectively, is that from the phase of demonstrations, early on, the protests had degenerated into hooliganism in mid-December, and into terrorism since January 19. Any talk of sanctions against Yanukovych or his ministers overlooks the fact that a major responsibility for the behavior of—and we can no longer use the term “demonstrators,” I would rather use the term “rebels,” because we are looking at a de facto armed rebellion—lies with Ukraine’s opposition politicians, and first and foremost with the neo-Nazi party Svoboda which has been recruiting young men of a thuggish disposition in Lvov, Ivano-Frankovsk and other places. It has effectively provided logistic support to the rebels in the Maidan Square.

RT: There’s no doubt that the EU is concerned about the events in Ukraine, because all this violence and bloodshed is happening in its backyard. Europe should react somehow, don’t you think?

TRIFKOVIC: Yes, and an even-handed reaction would have entailed not only pressure on Ukraine’s authorities, but also pressure on its opposition figures to call on the demonstrators to cease and desist—and that we haven’t witnessed so far. Quite the contrary, the pressure that Yanukovych finds himself under is due to all the concessions that he made in the last days of January—with Prime Minister Azarov’s resignation, with the withdrawal of the restrictive law on public assembly, and with the offer of amnesty. If you make unreciprocated gestures of a conciliatory nature, unfortunately it tends to be interpreted as a sign of weakness. Ukraine has crossed the threshold of toleration. For Yanukovych to continue to listen to the clarion calls from the West—and he has been called by Biden and by Kerry, and asked for restraint—would be self-defeating. All of these people are up to no good. They want regime change, they are interested in the geopolitical control over the key country in central-eastern Europe that links Russia with Europe’s heartland. They will not stop—as we know from Victoria Nuland’s talks with her ambassador in Kiev—by means foul and fair until that goal is achieved. Yanukovych should finally realize that dealing with the demonstrators and dealing with their political representatives is simply futile. The time has come to establish law and order and to calmly tell the West that they should start minding their own business. They have contributed to this crisis, they have aided and abetted—both propagandistically and logistically—the rebellion, which is the true stage we have, and they should now make amends for that.

RT: Srdja Trifkovic, Foreign Affairs Editor for the Chronicles magazine, thank you very much for your time and for sharing your views with us.