The only major political voice in Europe who has consistently spoken out against the dangers Islam, and its strict adherents, pose to our Western pluralistic societies.

NOTE: First published at The Gates of Vienna. 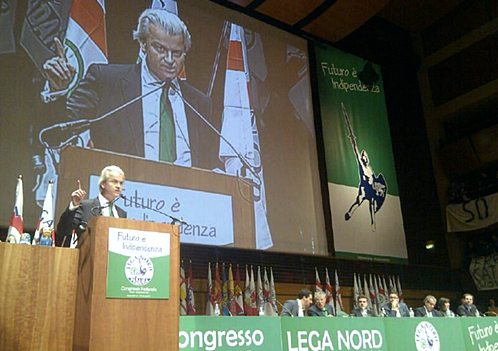 Below is the prepared text of a speech given today by Geert Wilders at a Lega Nord conference in Turin.

Thank you for inviting me to Padania.

I am here today at this important conference to pay my respect to your party, the Lega Nord and your leaders Maroni and Salvini.

My friends, 2014 is going to be a crucial year. We are at an historic point in history.

The EU project has failed. The euro has failed. We have paid billions for the South. We are no longer in control over own money, our national borders, our budget, our laws and immigration. But I came to Torino with good news:

Next May we will say, the people will say:

No more. Enough is enough.

We are proud of our identity and culture. Our countries heritage is Judeo-Christian and not Islamic. I say: no more Islam, no more sharia, no more mosques, no more imams, no more immigration from Islamic countries.

Let us work together:

Together with other democratic parties we have to make a stand against the monster in Brussels. Democratic parties all over Europe — parties such as mine, parties such as yours, and as many parties as possible such as the Freedom Party in Austria, the Vlaams Belang in Flanders, the Front National in France and I hope a lot more parties from different Europeans countries, should work together.

Let’s fight for our sovereignty, for Padania, for France, for Flanders, for The Netherlands and for other countries.

We are no extremist, no racist, no xenophobes, we are true patriots.

And that is why I call upon you:

Don’t be afraid, do your duty, help us to turn 2014 in the year of liberation.

Our people love their own country. Not Brussels.

We have to protect out identity, civilization and sovereignty.