The OIC is gunning for your freedoms.

Don’t sit there like a couch potato watching the attack on your civil liberties go unanswered. read up, get informed and get motivated. The forces of sharia keep marching on, and the only thing standing in their way, is you. Time to get into gear, and ensure that your politicians are taking this threat seriously.

The report below is the second in a three-part series. Previously: Part 1. 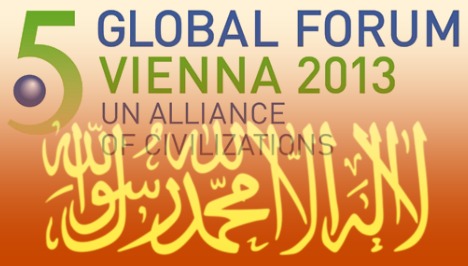 Reflections on a World Gone Mad
Part 2: Ignoring the central problem of our times

Waving its magic wand of laws, treaties, and human rights, the Alliance of Civilizations ignores what I would argue is the central problem of our times:

Are we talking about the Universal Declaration of Human Rights, the Geneva Conventions, and other international human rights instruments?

Or are we in fact discussing matters in terms of the Cairo Declaration of Human Rights in Islam, which defines human rights according to the sharia and contradicts all other human rights conventions?

Indeed, the words human rights were mentioned only twice (!) during the entire opening plenary, while at the same time the words peaceful dialogue, harmony, intercultural dialogue, discrimination against Muslims, xenophobia, mutual respect and Islamophobia were repeated ad nauseam. Universal human rights were left hanging on the coat racks.

The AoC, represented by AoC High Representative Jorge Sampaio from 2007 until 2013, generally shies away from solid explanations:

… the Alliance gives special attention to improving relations between the so-called Western and Muslim societies by deconstructing prejudices, misconceptions and stereotypes that fuel fears, feed hostility, ignite tensions, and spark violence; by promoting education for valuing cultural diversity and learning how to live together with our differences and commonalities. (Sampaio, speaking at working breakfast with Kevin Rudd, Australian MP and Minister of Foreign Affairs, October 2011)