And make no mistake about it, if she runs for the presidency in 2016, pseudo Democrat supporters of Israel will vote for her. They’ll turn a blind eye for whatever the reason, conveniently forgetting what this pants suit of crap said. H/T: Sheikh Yer’Mami, (pbuh) who has this take on her.

As Secretary of State Hillary Clinton turned over her office to Sen. John Kerry, she stated on Friday during her speech at the Council on Foreign Relations that America is at fault for the unrest in the Muslim world because of a failure to explain U.S. policies.

When a reporter questioned Clinton on why favoritism toward America by the Muslim nations during the Obama administration has been considerably lower than during the Bush administration, Clinton responded: “I take responsibility, along with our entire government and our Congress and perhaps our private sector.” 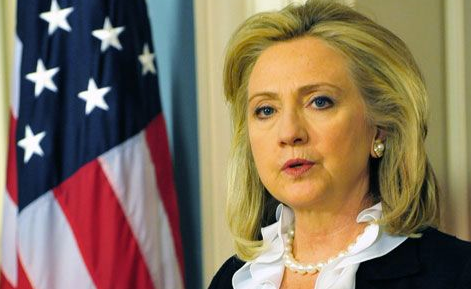 “In other words, everyone is responsible because most Americans are part of the private sector. The fact is the people in Islamic nations hate America because most of its citizens are not Muslims and the U.S. people for the most part support Israel,” said political consultant and attorney Jacob Wollinsky.

Clinton made her remarks at the Council on Foreign Relations in Washington in her final address as secretary of state. She stepped down on Friday and is succeeded by Democratic Senator John Kerry.