Oh and please do note that the Zabibah prayer bump on his forehead, (from all that slamming of his forehead into the prayer rug) shows how much a fundamustard he is, not a ‘reformer’, in spite of the US State Department’s opinion to the contrary. KGS

Post-Qaddafi Libya: The Triumph of the ‘Bulgarian Nurses Affair’ Cabal 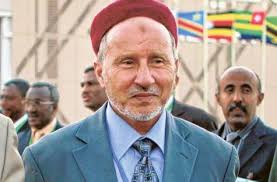 Mustafa Abdul Jalil, the man who twice upheld death sentences in the Bulgarian nurses show trial and is poised to lead post-Qaddafi Libya. But don’t worry: The State Department says he’s a refomer.

While making a correction in my column regarding Libyan “rebel” front man Mustafa Abdul Jalil, the former Qaddafi justice minister who now heads Libya’s government-in-waiting, the National Transitional Council (NTC), I realized that US and NATO support for this man and the NTC and the “rebels” is actually worse than I previously thought, which was already pretty bad.

I don’t refer only to the role Abdul Jalil played in the Bulgarian nurses show trial, which I mistakenly underestimated: I originally wrote that Abdul Jalil sentenced the five nurses and Palestinian medic to death when, in fact, as president of the Tripoli appeals court, he twice upheld their death sentences. Indeed, for these blatant perversions of justice (charges that the nurses had infected hundreds of Libyan children with HIV virus were unsubstantiated), Abdul Jalil was well rewarded. According to a March interview in L’Express with a Bulgarian journalist who has followed the case since it began in 1999, “loyal and loyal” Abdul Jalil “was named [justice] minister in 2007 as compensation for his intransigence during that trial.” (Thanks to Nidra Poller for the translation.)

2007 was also the year the Bulgarian nurses were freed due to EU intervention (money?), particularly from France, after serving eight years in Libyan prison. Bulgaria is still seeking a credible probe into allegations that the nurses were tortured by the Qaddafi regime into making confessions (later recanted).

Lotsa luck on that. The new and supposedly improved post-Qaddafi government-in-waiting is a veritable “Bulgarian nurses affair” cabal.

There’s Mustafa Abdul Jalil, as noted above. His lead role in upholding the show trial death sentences has completely vanished from the record. Now, he’s the “reformer” whom Uncle Sam has had his approving if  blind eye on for years.