The witch hunt is on indeed, with every Leftist opportunist taking a swipe at those of us standing up for western liberal values in the wake of the mass shooting in Oslo. Whether they be 3rd rate policy wonks, self described “historians”, media types, politicians or just plain pundits, if they’re for multiculturalism then they have their knives out for us.

The Ekeroths, both Ted and Kent, who are well known to the TT, are targets of the assault against those who oppose multiculturalism and Islamization in Sweden, this post by the Gates of Vienna needs to be spread far and wide as possible. KGS

If anyone was still wondering about the contours of post-Breivik Scandinavia, the following piece of nastiness should provide a hint of what lies ahead.

As I said last night, at this point it doesn’t really matter whether the atrocities in Norway were a “false flag” operation, or simply an opportune moment for the Socialist establishment to cripple the European resistance to Islamization — the outcome is the same. The Left has now found the longed-for albatross that it can hang around the neck of every politician or activist who has ever criticized Islam.

In Sweden the main target of opportunity is Sverigedemokraterna, the Sweden Democrats, who entered parliament for the first time in the most recent election. They are the only significant party in Sweden that opposes mass immigration, and they, like so many others, were mentioned in Anders Behring Breivik’s 1,500-page manifesto.

Long-time readers are familiar with the Ekeroth brothers, Ted and Kent, who are staunch in their resistance to Islamization, and have been involved in Counterjihad events all across Europe during the past four years. This makes them fair game for the guilt-by-association lynch mob that is now raging through the Swedish press.

A Swedish reader sent us this brief note, with a link to an appalling photo:

The witch-hunt is on. The Lund artist Dan Park has now presented this: 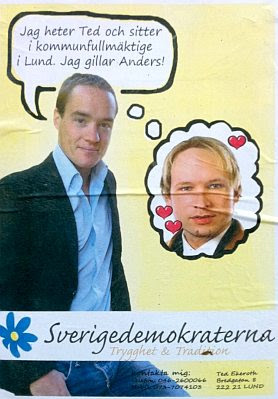 The text says “My name is Ted and I’m a representative of the municipal assembly in Lund and I like Anders”.

This targets both Ekeroth brothers, since the text refers to Ted but the picture is of Kent.

Stand up for the Ekeroths! Public figures who are being smeared need to be defended.

And indeed we will stand up for the Ekeroths. I know Ted and Kent, and this is a vile, demonic slander.

And it’s standard operating procedure for the Socialist Left. This is simply what they do. There is no behavior too low, no depth to which they will not sink, in an attempt to destroy their opponents. We all know that.

The massacre in Norway has presented them with an unprecedented opportunity to finish us off. They will have the help of the media and the government in their efforts, which makes our counteroffensive an uphill battle.

Yet it must be fought. The fact that our opponents are devious and totally unprincipled opportunists should not deter us from vigorous resistance.

Ted and Kent Ekeroth are not just men of peace. Nor are they simply advocates of peaceful change through democratic means.

They and other members of Sverigedemokraterna are in constant danger of physical attack from the “anti-fascists” of the anarchist left, who have mounted violent assaults on SD members in the past with knives and other deadly weapons. These thugs operate with impunity, with the tacit support — if not the outright collusion — of the Swedish government and the police.

Opposing the Islamization of Sweden is a serious business. It can even get you killed.

That’s what makes this smear-by-Breivik so deeply ironic and utterly sordid.

Stand up for the Ekeroth brothers. Stand with Sverigedemokraterna!