Not only did Simri Diab not want to cooperate with the female Shin Bet security guard at the annual foreign correspondents event in Jerusalem, where Israeli PM Benjamin Netanyahu was to speak, she then fabricated a story to cast the Israelis as ‘racist’ bigots as well:

“She noticed that the guards had created separate queues for Arabs and other journalists.”

But unbeknownst to the Al-Jizz reporter, Israeli blogger, Yisrael Medad, from My Right Word happened to be there, and says that was not the case, everyone was queued together. It’s an entirely a different issue altogether if she was directed into a different line to await a more thorough inspection. The following picture was taken by Yisrael Medad at the event. KGS 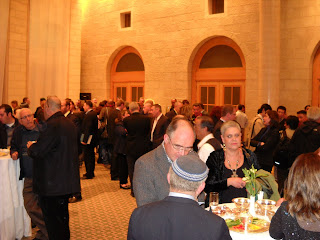 Read Medad’s take on it here.

A pregnant reporter with al-Jazeera TV channel was barred from an annual event for foreign journalists addressed by Israeli Prime Minister Benjamin Netanyahu for refusing to remove her bra during security check.

Najwan Simri Diab told news portal Ynetnews that she was asked to stand in the queue with colleagues and journalists on her arrival to the event venue. She noticed that the guards had created separate queues for Arabs and other journalists.

Simri Diab, who is based in Israel, said she had complained to the guards that she could not stand up longer because of her pregnancy. They told her to sit down and wait. They later took her downstairs and asked her to remove her clothes and she complied. “I was left with just my undershirt and trousers, without my shoes and the rest of my equipment,” she said. The security check did not end there and she was later asked to remove her bra.

“I asked why, but the female officer insisted. Her supervisor came over later and insisted as well. I refused and she said, ‘So you won’t go in,'” Simri Diab said.